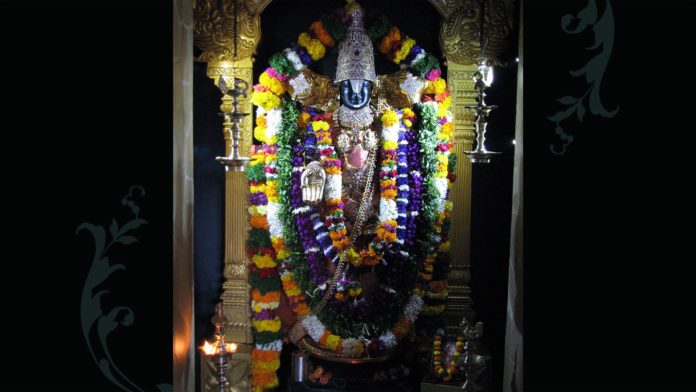 “Don’t be worried about small or big obstacles.. Understand the nature of Mother and her love and become undeterred.. The Mother sometimes throws up the child.. It is just a play.. Don’t be worried.. When there is an obstacle, like a stone on the way of a running stream, it runs over the stone or moves around it and thus makes music and sings a song..

Similarly, every hurdle makes a better musician.. Sometimes He drowns us only to make us collect or pick up the peerless pearls in the depth of the ocean.. You are born to sing, reborn to sing, to listen to unborn songs of your life.. You are born to love Him and allow Him to love you.. Your birth is a Divine Romance – Bhagawan Sriram Sir

Beloved reader, before proceeding to know about the non commercial, non profit making Tirumalesa – Bhagawan Sriram Global Meet in Chennai, you must first know Who Bhagawan Sriram Sir is, just in case, you are coming here for the first time..

Who Is Sriram Sir And Why Is He Called Bhagawan

There’s a famous 400 – year old Swayambhu Lord Sri Venkateswara Temple in this village, called the ‘Timmappa Temple’, and it is believed and is also proved that Sriram Sir is the divine reincarnation of Lord Timmappa – the other name of Lord Venkateswara – of this Temple.

Sriram Sir worked as an English Lecturer, all through His career, although He had every opportunity to become one of independent India’s greatest ever IAS officers.. He earned His Doctorate in English from Osmania University, Hyderabad, in the year 1996, for His research work titled, “Telling Stories The Indian Way”.

But Who is Sriram Sir : Dr Sriram Gajula, more popularly known as Sriram Sir – the Nature lover, peace seeker, global speaker and a reveler in spirituality – to His select few followers, was born on the 11th of May, 1957 in a small village, in Telangana state, called ‘Maldakal’ (Kannada) which means ‘Primal Stone’.

He was one of the 35 illustrious research scholars who have obtained their Doctorates in English under the able guidance of their more illustrious Professor M. Sivarama Krishna, the former Head, Dept. Of English, Osmania University, Hyderabad.

Sriram Sir first entered the class room of Sivarama Krishna, in 1977, as an ordinary student and later went on to become his Divine Master.. The illustrious Prof. Sivaram Krishna had many miraculous experiences with Sriram Sir, in his forty years of long association with Him.

When someone asked the Professor, “when did you first notice the divinity in your student, Sriram”, the Professor promptly replied, saying, “when I realized He has access to my mind”.. PERIOD

Sriram Sir’s book, ‘Viveka Sravanti’ (later changed to Journey Into Joy) – which is a compendium of a few Telugu and English letters He had written in His university days to some of His friends in distress – was regarded as “a powerful book as powerful as the Bhagawad Gita” by none other than the distinguished former President of India, Dr Sankar Dayal Sarma.

Sriram Sir not only says, “everything in this world is predetermined and well determined right from the movement of the blade of the grass to the movement of the monster” but had also proved to many eminent personalities like, Sri Ekkirala Bharadwaja and Sri Ekkirala Vedavyas, that this theory is correct by materializing and gifting them the sacred Salagrama stones and other divine objects.

He was also at a time present in two different marriages performed on the same day and also at the same Muhurath in Nizamabad, while He was working there as an English Lecturer.

I have written and posted a six part story series on tirumalesa.com on the divine life of  Bhagawan Sriram Sir, after waiting for almost eighteen months for permission from Sir, with the title, “An Incredible True Story Of A Miracle Man Seeing Your Tomorrow”.

This story was read by about five million people across the world, who went into a shock after reading the spellbinding content presented in it. After reading it, many readers have mailed me, from many corners of the world, requesting me to get them an opportunity to meet Sir..

Since a personal meeting with Sriram Sir is impossible, I have requested Sir to give a day’s time to spend with our readers.. Sir smiled and obliged and I have hosted a special meeting in Hyderabad, on the 24th of December, 2016, exclusively for the readers of tirumalesa.com..

Two hundred and fifty readers have come from many parts of the world, including from US, UK, Dubai, Australia, Singapore and even from Switzerland.

Sri PVRK Prasad, independent India’s one of the most illustrious IAS officers who was also the former EO of TTD, had attended this meeting and met Sriram Sir for the first time in his life.

Many IAS officers, who are all followers of Sriram Sir from their student days, have also attended this historic meeting.. Shocking the readers and all those present in the hall, that day, Sriram Sir had performed a mind blowing miracle during the meeting.

Please Click Here to read the six part story series that I have written on Sriram Sir if you have not already read it.

Recently, between August, 2018 and October, 2018 Sriram Sir went on a whirlwind tour of USA and spoke at many places, including at the Harvard University, University of Pennsylvania, India Community Center, Santa Clara, the Mercer Islands in Seattle and at Sri Venkateswara Temple in Pittsburgh among others..

FYI, one more Tirumalesa – Bhagawan Sriram Sir Global Meet was held in Bangalore on the  10th of March, 2018.. More than three hundred Tirumalesa readers from different parts of the world have attended this grand meeting, which as Sir Himself had said,

“The best and the grandest meeting I have ever attended in the last thirty years”..

City Of The Meeting : Chennai, India

Venue Of The Meeting :  In a top rated 5 star hotel in Chennai

(Children below five years are not allowed.. This price includes all Tea, Coffee, snacks and lunch break.. Details below.. However, accommodation not included in this price.. You must make your own arrangements if coming from outside of Chennai)

Sri L V Subrahmanyam, IAS, former Executive Officer, TTD and the present Addl. Chief Secretary of Andhra Pradesh state govt. would be one of the guest speakers in the meeting, that day.

Other Important Details Of The Meeting

In addition to Bhagawan Sriram Sir and Sri L V Subrahmanyam, there will be many distinguished personalities, VIPs and IAS officers – who are all followers of Sir – taking part in this meeting.. They would be loving to share their amazing experiences with Sriram Sir, with you.

There will be a screening at the security area of the Hotel and only those readers with appropriate papers with registration numbers, sent by tirumalesa.com team, will be allowed into the conference hall.

The meeting will be held in a fully air-conditioned hall in a top 5 star hotel in Chennai, with excellent audio video presentation facilities.

Since Sriram Sir speaks frequently on many renowned global platforms, tirumalesa.com and it’s team will be taking every little care to make sure that all the required global standards are maintained during the meeting.

Sriram Sir is very particular about punctuality, hence, the meeting would commence sharp at 11 A.M before which time all the registered participants are required to take their seats.

Tea, Coffee and cookies are served to all the participants on arrival at the Hotel.. Then, the first break would be at 1 P.M for lunch; next at 3.30 P.M for Tea and snacks..

After the meeting is over, Tea, Coffee and snacks are served again at 6 P.M at the end of the meeting… All foods are vegetarian only.

The entire session of last two hours, from 4 P.M to 6 P.M will be a question answer session by Sriram Sir.

This is a non commercial and non profit making charity event to help Tirumalesa readers see and listen to the Omnipresent, Omnipotent and Omniscient Bhagawan Sriram Sir, so, no one is paid any money here.. Even Sriram Sir doesn’t take a single rupee for His time.

I shall personally monitor all the activities related to this meeting and would also see that every moment of your stay in the meeting hall is made sweet and memorable..

My well disciplined 30 – member Executive Committee, comprising of well learned readers from Hyderabad and Bangalore and Chennai, is already in action there and is making all the appropriate arrangements for you.V

How To Attend This Meeting

If you wish to attend this meeting please send in your details with the subject, “Sriram Sir Chennai Meeting” to our mail id meetings@tirumalesa.com

In your mail, please explain me clearly who you are and where will you be coming from.. Please also mention how many members, along with you, wish to attend the meeting with all their details like their name, age, gender and mobile numbers.

If you are the main contact person please attach a copy of your photo ID card.. Please do not forget to mention your mobile number as well.. Please do not send any messages, regarding your interest to take part in the meeting, either to my Facebook ID or WhatsApp or to my other mail ids..

Let all correspondence be confined to the above mentioned mail id only.. Otherwise, it would be impossible for me to remember and monitor all your messages.

Those who have already send me a mail and awaiting my reply please do not send me another mail.. You shall receive a response shortly either from me or from my team.

Another Most Important Point.. During the meeting, you can see Sriram Sir and listen to His life changing words but please do not expect a one to one discussion or a personal meeting with Him.. It is just not possible and Sir doesn’t give time.

Of course during the breaks, you may shake hand with Sir and introduce yourself but you cannot indulge in any personal questioning or conversation.. You should also not ask Sir His personal contact details..

However, the good news here is, there will be a two hour question answer session only with Sir in the last session of the meeting and during that session you may raise whatever questions you want to regarding any doubt you have in mind.

Just For Your Info : I have created a closed Facebook group, “Bhagawan Sriram Sir”, about an year ago, every Friday, some mind blowing miracles of Sir.. Only on my approval you can join this group.

If you want to join this group, please Click Here and then click on the join button in the group page there.. I shall approve your request after a little scrutiny of your profile.. Good Luck..

“A miracle is a spontaneous concretised expression of His love to the one who psychically needs it and karmically deserves it.. It is cosmically sanctioned at the ripe and right time.

The purpose of miracles is not to entertain anyone with a sense of wonder and astonishment but to instill confidence in a person when it is most needed; and to promote spirituality, confidence and faith in a person needing them”.. Bhagawan Sriram Sir