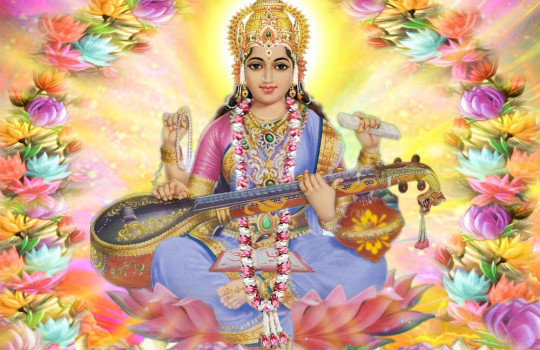 Please Click Here to read the previous parts of this story..Now continue reading this part..

For a few moments,the mystic Brahmin Nemani Subbarao kept staring at those letters that were very distinctly appearing before his eyes on the north eastern corner of the wall that’s there right in front of him in that room..

He was just unable to believe his eyes although they were clearly able to see in beejaksharas the Gayathri Manthra appearing before him on the wall..Those beejaaksharas appeared for a few more seconds and later disappeared on their own as the divine voice of Goddess Saraswathi Devi was then again suddenly heard in that room..

And this was what the divine voice said..

“Dear Subbarao..I have really come to bless you personally today and that was not any illusion..Let me tell you again..Never stop chanting the Gayathri Manthra in your life and I once again wanted to remind you the same..”

It was then that Subbarao wept.. And wept inconsolably.. Uncontrollably.. Unstoppably.. With joy.. And with gratitude..He remained in that unbelievably exalted state of divine ecstasy for a few more minutes until his wife,Venkata Lakshmi,suddenly opened the entry door of the room and came in side..

She was shocked seeing her husband in such a typical state..She quickly rushed to him and asked him “what the matter is”..Subbarao told her everything that happened in the room during her absence and also told her how Goddess Gnana Saraswathi Devi,the principal deity of Basara temple had blessed him..

There are certainly a lot of things in this entire drama for each one of us to learn and draw inspiration..If you can go back in time and recollect all those unpleasant experiences you had in the past,am sure,there would certainly be a few such incidents,which in the later part of your life must have made you think that they happened for good in your life and in fact were “great blessings of God but in disguise”…Am I not right..???..

A much delighted,a much relaxed and a much more rejuvenated Subbarao finished all his daily morning activities to his heart’s contentment and then sat down to do something more creative to please Goddess Gnana Saraswathi Devi..

Then he remembered what the Goddess told him at the time when he expressed his desire,a few days ago ,to write a new song and sing it in the Basara temple..Beloved reader..Let me remind you,that this is what the divine female voice told Subbarao that evening..

“..Dear Subbarao..Why attempt a new song and write a new lyric now..You can think about the new song later but before that remember there’s already one song you often sing praising me..Just alter the lyrics of that song and present it in a way that it suits the Baasara Gnana Saraswathi Devi here..”.

Since he already altered those lyrics and sang that song in the Basara temple,Subbarao now wanted to write an altogether new song and dedicate it to Goddess Gnana Saraswathi Devi before he leaves Basara.. But Subbarao,unfortunately,is not a seasoned lyricist to write any thing he wants to,with ease..

After some more grinding process,Subbarao could then write the first two lines of the Pallavi..Even in those two lines he could not complete the second line fully and left a blank in the middle of the line.. And here’s what Subbarao wrote..

Subbarao kept thinking vigorously for a few restless moments but his sharp mind,that’s always sharper in doing all the intricate Mathematical calculations in his mind,could not deliver the same sharpness at that time in generating just three appropriate words to fill that gap..

Then who will fill that gap..You guessed it right..The One who gave Subbarao those lines would fill that gap too..But how..

Since he was not able to fill that line,Subbarao went ahead and started writing the other stanzas in that song and in about a couple of days time could complete the whole song..However,he was still not able to find the appropriate words to fill that small gap in the song..

One day,after making a few more attempts he left it there in the same condition and retired to bed that night..Later,there was a little relief that night for him,from the sweltering winds,as a cool gentle breeze emanating from river Godavari started blowing across the holy Basara temple town..

Subbarao,who normally wakes up at 3.30 a.m in the morning,could not wake up up to 5.30 the next day as the soothing gentle breeze from river Godavari calmed down his senses and made his tired body sleep much beyond the scheduled time..

Later,he quickly finished all his daily rituals and sat down to finish that song at any cost that day..It was after a few more minutes of glorious uncertainty,that Subbarao suddenly heard the musical divine voice of holy Goddess Saraswathi in that room..

And this was what the divine voice said

“Now add these three words “Gnana Ghana Srutulanu” in the second line of the Pallavi you have written so far and then see..Your song would now be complete..All the other lines in the song are perfect and no need to alter them..”

A joyous Subbarao very gratefully thanked Goddess Mother Gnana Saraswathi Devi saying,”..O Mother, how aptly You have put these words in the Pallavi..Am blessed..Am honored and am extremely thankful to you..But Mother..Can You please explain me the exact meaning of these divine words..”

With a gentle musical smile,the holy Goddess said,”You have placed one Sruthi in the Pallavi and I have now added another Sruthi to it..While the first Sruti you have put,as you are aware,is related to music and the second Sruthi I have added is related to Vedas..”

“In one way,through this usage of word Ghana here,am trying to praise the qualities of the Vedas..And my meaning of Ghana here in this context is ‘great or divine’ and am emphatically conveying that Vedas are not only great and but are also divine..”

“The second important meaning am trying to convey through the word Ghana here is ‘Solid’..This word solid normally explains the material state of an object..For example a solidified object or a material ..”

“However,my other idea of using the word Ghana here in this context is to help you understand that “Veda is solidified knowledge”..Now..Is that clear Subbarao..”

Subbarao who was shocked with the analytical explanation of the holy Goddess Saraswathi replied in a humble tone,”..So clear Ammaa..I have now come to understand why for ages You are called the Goddess of learning,music,knowledge and wisdom..Please accept my salutations Mother..”

My dear friends,please give me a moment here and note a very important point..

Although the entire above conversation was in Telugu,you may however be shocked to know that the Goddess uttered these four words “Veda is solidified knowledge” in English to help the engineer in Subbarao to understand the exact meaning..Sri Subbarao specifically told me about this particular English usage of the Goddess Saraswathi…PERIOD

With that same magical smile,the holy Goddess said,”Dear Subbarao..I could have come to your rescue and given you these words much earlier than you thought but I just wanted to see how far you go in your efforts and how long you show that dedication..”

“After a particular point,am convinced that you have finally reached the pinnacle of dedication and to an absolute point of no return..Then I thought it’s time for my intervention..Secondly,I also wanted to prove to you that there are always limitations to human efforts but the interference of God begins at the end of all such human efforts and limitations..”

‘Any big or small creation in this human world,Subbarao,or for that matter any song or any book cannot be created without my blessings..Am always standing as a supporting pillar to all those creative works in this world and any one of them who created these works either for any reason or due to his ignorance or arrogance starts saying “I” then I would say “why should I” and move away..”

“Then you know what happens Subbarao..The creator collapses and so do his creations..Therefore it’s important for everyone in this world to remain rooted to the ground and stay humble all through his life irrespective of whatever he may have achieved or accomplished in his life..And it’s life and that’s how it should be led Subbarao..Is there anything else that you want to know from me..”

There’s a lot that Subbarao wanted to ask at that moment but he was lacking that courage to ask.. Observing his hesitation the Goddess said,”Why that hesitation Subbarao..Let me know what you want to know..”

With a little hesitation..

Subbarao asked in a low tone..”..Mother..There’s a big doubt in my mind ever since I came to Basara.. May I ask about it now…Mother..??..”

Smiling again the Goddess said,”..I know what it is Subbarao..You wanted to know why I asked you to go to Basara all the way from Visakhapatnam during such terribly hot summer season..Am I right Subbarao ..”

With slight chills in his voice Subbarao said,”..Yes mother..That’s what I wanted to know..It’s so hot here in Basara..Neither I nor my wife have experienced this sweltering conditions before..We are not even able to sleep properly in nights due to such extensively hot conditions here..So I was eager to know for what purpose are we being exposed to such terrible conditions here..Please forgive me Mother if I have crossed my limits..”

With a little seriousness this time,in Her tone,the Goddess Mother said,”There are several reasons for that Subbarao but let me tell you about the most important reasons,only which you are entitled to know.. ”

“The first reason..You should personally receive my (Goddess Gana Saraswathi Devi) blessings here..The second reason..It’s time for you to acquire abundant worldly knowledge and wisdom which is possible only when you meditate the Gayathri Manthra here in this land of great wisdom..”

“Most importantly..You always wanted me to offer speech to your co-brother Kameswar Rao’s younger son Saketh who is congenitally dumb..It is for that reason I have induced in you the thought of reciting Muka Pancha Sathi here in my presence in Basara..Unless you recite it in my presence here,facing all such troubles you mentioned,you will not be able to achieve that..”

Before you proceed to that part of the story let me tell you about an unbelievably great miracle..The then dumb boy Saketh,about whom Goddess Saraswathi told Subbarao,is now studying in his 9th class in the city of Visakhapatnam and with the divine blessings of the holy Goddess Saraswathi Devi,he’s is able to speak absolutely normally now..