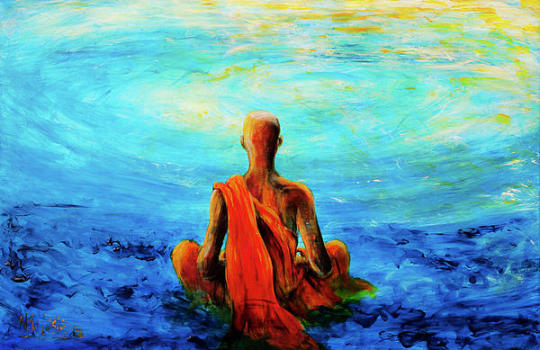 If you haven’t already read,Please Click Here to read the Prologue to this story…

Now please go ahead to read the first part..

All through the struggled life,the mystic Brahmin Nemani Subbarao thus far lived,he was nurturing a secret desire in his mind not allowing even his beloved wife,Yenkata Lakshmi,notice it..All through that life,this desire was growing in his mind as gradually or as beautifully as a flower plant grows in a nursery..

After attaining some stability in his professional life,Subbarao decided to pursue this hidden desire with all the seriousness in the world..

But What Was That Secret Desire Subbarao Had Hidden Even From His Wife..??

Subbarao,right from his childhood,was greatly influenced by the noble deeds of his saintly ancestors..Most of these ancestors have led an ascetic life in their last phase spending it mostly in meditation(Penance)..

Similarly,Subbarao too was vouching to detach himself from all the worldly activities and lead the rest of his life in a silence filled transcendental meditation…His desire was to follow a specific spiritual path,passing through which he would finally reach that dominion of renunciation and final salvation (Moksha)..

He knows well that to reach such an exalted state in spirituality a true Brahmin needs to relentlessly chant for many days,months and years,one divine mantra of any particular Hindu God or Goddess..FINE..But what Subbarao was unable to understand at that moment was who is that God Or Goddess by chanting whose mantra his canine hunger for that elevated spiritual wisdom would satiate..Who..??

This particular question – to which no human being on this earth can possibly provide a convincing answer – started tormenting Subbarao’s mind initially for hours in a day and then for days in a week and then for weeks in a month and finally for months in an year..

This one mall question ‘WHO’  started strangulating Subbarao’s mind in an atrocious manner making his days miserable to live and nights terrible to sleep..Not allowing anyone around him notice what was going through his mind Subbarao lived in such an unimaginably agonizing mental state for almost an year..

The large and heavy wheels of an ever merciless time

Were passing through his life at their own pace without providing any proper solution to his unusual problem,.Subbarao’s agony started doubling with every passing day with a series of endless questions thwarting his mind night after night..

“Whom should I offer my penance to.. Which God or Goddess mantra should I chant relentlessly to free myself from these human problems and worldly desires..??..Which is that single mantra that would help me obtain salvation..” ..”..

After some period of time,with so much of maniacal torture and so much of intra psychic stress tightly holding every nerve in his body,Subbarao started growing terribly restless..Terribly breathless..And terribly uneasy..

Later,looking strangely into all the directions of the room,Subbarao gradually but dangerously started slipping into a fit of terrible rage and madness…He was cursing himself and questioning the invisible Gods and Goddesses as

“..Why are you not coming to my rescue and why are you not guiding me about what I need to do to reach that exalted state in YOUR kingdom of silence and serenity..Whom should I offer my prayers to now and which Mantra (Hymn) should I now recite to achieve that divine state..Please tell me..Please help me O’ God..Am dying..Am really really dying..”

Happened without any thunder and lightning and happened without any sound of temple bells..It happened in a flash pulling Subbarao back from the clutches of that diabolic death which at that point of time was hungrily staring at him from a very close point..

And this is exactly what has happened in that room that moment..

Before that..I want everyone of you to believe that all the combined intellectual energy of all the great Nobel laureates in this world put together shall not be able to analyze what has happened in that room that time..

During his enormous weeping and the cursing process,Subbarao didn’t notice that the little space that’s there around him in that small dark room,that he locked himself inside,was gathering an unusual but an amazing divine hue of golden yellow driving away all the darkness in the room..

At that time Subbarao was almost slipping into a state of complete collapse and exactly at the same time a truly mesmerizing and soul capturing female voice was heard in that room..And this is what that divine voice said in a soothing musical tone..

“My beloved son Subbarao..Please get up..”..

There was an enchanting grace in that female voice..Subbarao who was too locked up in his mind at that moment could not hear that sweet female voice..And then..The voice said again..

In addition to the sweetness there was some command in that female voice now which Subbarao clearly heard and noticed.. He slowly opened his eyes and firstly found a great light all around him in the room..For a few moments he could not understand where that amazing light is coming from and who is that never before heard female voice that’s calling him by name.

With his eyes almost popping out of his face he looked around the room to make sure there’s no one else in the room other than him that time..He however didn’t find anyone there..Observing Subbarao’s confusion,the female voice with a little smile this time, said,

“..Dear Subbarao you will not be able to see me but you can only hear my voice..So now listen to what I say..Why are you weeping so much..Don’t you remember that at the time of performing your Upanayanam your beloved father already taught you the Gayatri Mantra.. ”

“..Don’t you know Subbarao that Gayathrri Mathra means ‘Gayantham thrayathe ithi Gayathri” which again means that Gayathri Manthra shall forever protect the one who chants it..Don’t you know my son that it’s the most powerful Manthra in this universe and there’s no other Manthra in all the four Vedas that can come close to it..”

Although still looking blankly into all the corners of the room,with the same fear and confusion,Subbarao this time was slightly a more composed man and started listening to that invisible female voice with utmost attention..

“..Subbarao,Gayatri Manthra is not only the mother of all the Manthras but it’s also the most sacred one among them..As long as a devotee is chanting this Manthra everyday there’s no need for him to chant any other Manthra for any divine protection in his life..”

“..The enormous power of this Gayathri Manthra shall forever protect it’s chanter from all the evil effects of all the bad planets in this galaxy…It shall also forever give the chanter and his family good health,great prosperity,success in all their endeavors and happiness all around..”

Subbarao was now listening to the female voice with great reverential attention as the voice finally said before disappearing..

“..Subbarao,you know Gayathri Mantra very well.. Hereafter make it a point to recite it as many times as possible in a day and also make it a point to chant it for as much time as possible..In a few days from now all your fears will go..All your problems will be solved..And all the rest of your life you shall live with peace,contentment and happiness..”

Saying so the female voice disappeared from that room..

Later,it took a while for Subbarao to come out of that divine shock hut he did not waste any more time in thinking about who that Goddess was behind that female voice and why did she speak to him that day ..Instead,a fully rejuvenated Subbarao swung into an immediate action and started chanting the Gayatri Mantra as many times as possible in a day..

Firstly,he started chanting it thousand times in a day and later gradually increased the count to ten thousand times..He also slowly started withdrawing himself from all the worldly activities,except his tuition activities,and started spending most of his day’s time in reciting the all powerful Gaythri Manthra..

Exactly At This Point Of Completion Of The Five Million Mark..

An excellent marriage offer came to Subbarao’s daughter Aparna..This offer quite surprisingly came from the illustrious family of Dr.Kolluru Avatara Sarma of Kakinada town in Andhra Pradesh..Dr.Sarma is also a great devotee of Goddess Gayathri and he too recites the Gayathri Mantra regularly a number of times in a day..

But what’s more surprising here is that the full name of Dr.Avatara Sarma’s son – the prospective bridegroom – is Gayathri Vara Prasad..Subbarao was an immensely happy man after knowing that there’s Goddess Gayathri in his would be son-in-law’s name too..He could also realize that the marriage offer was certainly sent to him by none other than his Mother Gayathri Herself..

After successfully performing his only daughter,Aparna’s marriage with Gayathri Vara Prasad,Subbarao was then left with a little more time to spend in chanting the Gayathri Mantra