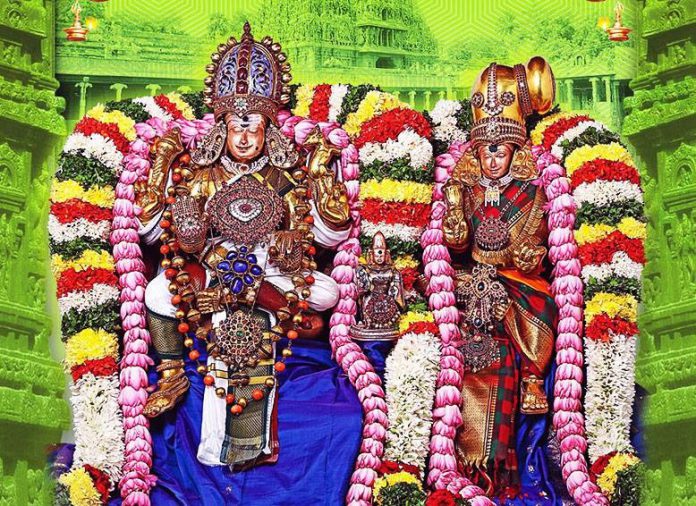 On a pleasant evening,

A circus company procession was going through the streets of the Temple town of Madurai in Tamilnadu..

As part of the procession..

The company was  parading all its Elephants and other animals to lure customers to their Circus shows in the town..

Many managers and animal trainers were cautiously guarding and supervising those animals at that time.

Passing slowly through the streets of Madurai..

All the children and other onlookers were cheering the procession..

Passing slowly through that street..

Upon reaching the Temple..

Before anyone could even realize what was happening..

One of the Elephants..

Disobeying the orders of all the managers and trainers around her..

And hurriedly walked through the open gates of the Temple and entered the Temple..

She walked straight into the Sanctum area of the Temple..

Standing obediently in front of Goddess Meenakshi and Lord Sundareswarar, the Principal Deities (Moola Virat) of the Temple..

She first raised both her two front legs.

Then, raised her trunk..

And then trumpeted loudly as though offering her prayers to the Deities..

She stood so in that position and kept trumpeting for almost two minutes..

Taking all those devotees and other staff of the Temple present in the premises that time into a state of shock and dismay..

She slowly turned back and joined the Circus procession as obediently as she left it.

Who told that Elephant about the supremacy of God and the Goddess and that she should pay her obeisance to Them..??

Conclusion & Moral Of The Story

Forest is the Natural habitat of an Elephant where she lives in complete communion with Nature, eating and enjoying whatever she finds there. Then, how cruel it is to forcibly bring it to cities and make it perform many feats that it may not enjoy performing.

At that moment, when the Elephant walked into the Temple, there may be a trained Mahout around her constantly poking her with sharp objects. The Elephant too must be in some other pain caused either by excessive training or by lack of proper food.

However, upon sensing God’s presence around her, she forgot all her pain, rushed into the Temple, paid her obeisance to the God and Goddess and promptly returned to her duty despite there being so much suffering in that duty.

Why did I tell you this story now..??

What is the message in it for you..??

“Your duty is as important to you as your worship towards God”.

The Elephant didn’t waste time in the Temple reciting Stotras or Mantras.

She just offered a Namaskar and returned to its duty.

Moral of the story : Performing your duties with reverence – be they be to your family, your profession, your society or to your fellow human beings – is as important as performing your prayers to God.