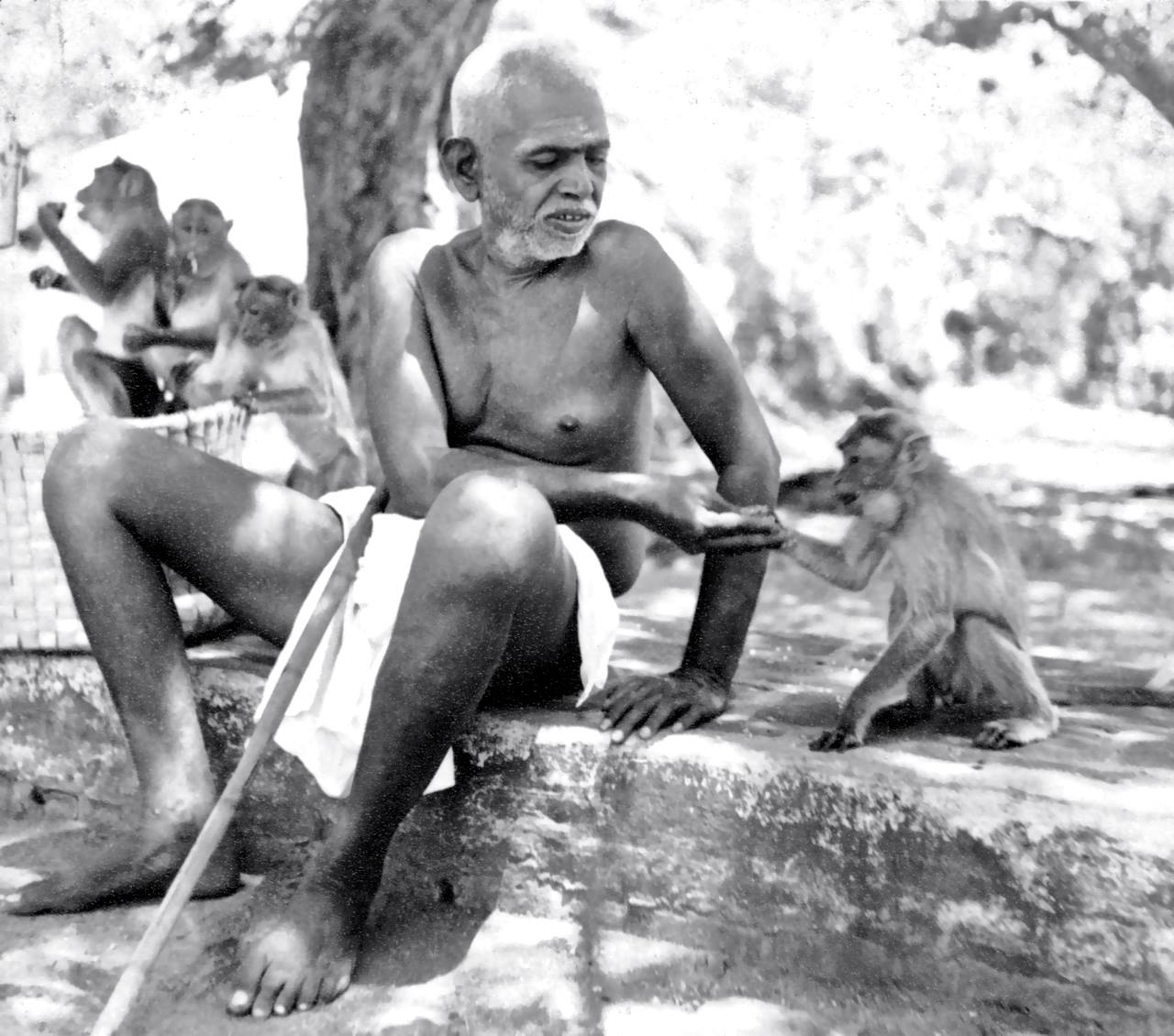 As most of you may already be knowing or may have heard in your spiritual life, Sri Ramani Maharshi is swayam Bhagwan who had quite authoritatively proved to the human world,through many miraculous experiences,who He is and what He is up to..

Some of His divine experiences are well known to the world although some are not..During His glorious living time,Bhagwan Ramana Mahashi was a strong propagator of the cosmic theory of Pre Determinism and a profound practitioner of the same, which He would either preach through His discourses or prove through such experiences..

Here’s one such experience which I have accidentally stumbled upon while reading a great book on the theory of pre determinism..Well,as a staunch believer in the pre determinism theory,I shouldn’t be using words like “accidentally” because even this reading of mine of the said book too must be pre determined and well determined..PERIOD

Mrs.Taleyarkhan,a Parsi devotee of Bhagwan Sri Ramana maharshi,had described the great saint saying, “Bhagwan is a walking God and all our prayers have always been answered..That is my experience..”

She narrated this following experience which was later shared by many of Bhagawan’s ardent devotees at various places..

“Maharshi led an absolutely simple life and from a very young age lived in the hills of the Arunachala..In course of time Arunachala became an internationally famous pilgrim center,attracting devotees from all parts of the world..

Maharshi seemed to have had a very soft corner for all the animals..Among the several animals that have inhabited the holy Arunachala hills,the Monkeys were the most frequent visitors to Maharshi’s ashram (hermitage).. When Bhagwan was in the Virupaksha cave,an adult male Monkey badly mauled a little Monkey..

When it fell down motionless, the attacker left it for dead..After a while, the little Monkey has gained it’s senses and limped slowly to Maharshi’s asram probably for protection..Bhagwan took pity on the hapless creature; dressed it’s wounds; and nourished it back to health..

Bhagwan then named the little one “Nondi” and asked,”when you become the king of your tribe,will you ever forget me..”..The monkey,who seemed to have understood the words of Bhagwan,shook his head as though he will not forget Bhagwan when he became a king..

Nondi,the monkey then went back to his home and in due course of time became the king of all the other monkeys in the hills.. As promised,Nondi visited Bhagwan one day with his queen and the retinue and enjoyed the hospitality of Maharshi..

Bhagwan too blessed the Monkey and it’s family..All the monkeys prostrated before the holy Lotus feet of Bhagwan and left for the jungle..” Mrs.Taleyarkhan concluded..

Now here are the interesting questions..

Did the Monkey become the king of the jungle after receiving the blessings of Bhagwan or was it really destined to become the king which Bhagwan already knows..???..Was the Monkey needed to go through that pain to reach the pinnacle of glory in his life..???..

Did the Bhagwan test the pain bearing capacity of the Monkey to test it’s eligibility to become the king of the jungle..If so,is Bhagwan symbolically conveying to the human world that those who wish to go to the top should need to go through the pain,first..??

Then,in such a case,Bhagwan Himself must have given the little Monkey the much needed pain without receiving which the Monkey wouldn’t have approached Bhagwan nor received His approval to become the king..

This again means it is not only the evil but also the pain that is very much necessary to our life which Sri Bhagwan symbolically proved to the human world by giving such an experience to the Monkey..Right..?? .. I know it’s absolutely right..

Well,this may be a trivial experience for us to know,however,when viewed from the point of destiny and determinism,it assumes great importance…

With reference to this experience, a devotee by name, Devaraj Mudaliar, asked Bhagwan,”Whether only the important things in one’s life such as one’s occupation or profession are pre determined or whether even trifling acts are also destined..Secondly,the lives of all living beings including monkeys are also pre determined..???..”

Replying to this question,Bhagwan smiled and said,”Everything is pre determined.. One of the purposes of the birth is to go through certain experiences which have been marked out in the karmic unfoldment of life.. The whole program is chalked out..”..Saying so Bhagwan rejected all the arguments that are not in favor of pre determinism..

Many great writers like Arthur Osborne and Paul Brunton have written excellent books on the life and times of Bhagwan Sri Ramana Maharshi..

1. Let any amount of burden be laid on Him, He will bear it all. It is, in fact, the indefinable power of the Lord that ordains, sustains and controls everything that happens. Why then, should we worry, tormented by vexatious thoughts, saying: ‘Shall we act this way? No, that way,’ instead of meekly but happily submitting to that Power?

3. Atman alone exists and is real. The threefold reality of world, individual soul, and God is, like the illusory appear­ance of silver in the mother of pearl, an imaginary creation in the Atman. They appear and disappear simultaneously. The Self alone is the world, the ‘I’ and God. All that exists is but the manifestation of the Supreme.

4. The realisation of truth is the same for both Indians and Europeans. Admittedly the way to it may be harder for those who are engrossed in worldly life, but even then one can and must conquer.

5. Persons often approach Maharshi with the question of the compatibility of spirituality with an active domestic or social life. He asks them: ‘Was not Rama spiritually advanced, and was he not leading a householder’s life?’

6. The truth is that every time our desires get ful­filled, the mind, turning to its source, experiences only that happiness which is natural to the Self.

7. This is the surest way to handicap oneself, this burdening of one’s mind with the fear of failure and thought of one’s failings. That fear is not true. The greatest error of a man is to think that he is weak by nature, evil by nature.

8. When the mind becomes one-pointed and, thereby acquiring strength and power of endurance, easily reaches perfection in the method of inquiry in quest of the Self.

9. These controversies as to which is superior – Fate or Free-will – arise only to those who look not into the root of both. If one however knows the Self, the root and cause of both, one transcends both and will never again entertain thoughts of either.

10. Unless and until a man embarks upon this quest of the true self doubt and uncertainty will follow his footsteps throughout life. The greatest kings and statesmen try to rule others, when in their heart of hearts they know that they cannot rule themselves. Yet the greatest power is at the command of the man who has penetrated to his inmost depth.