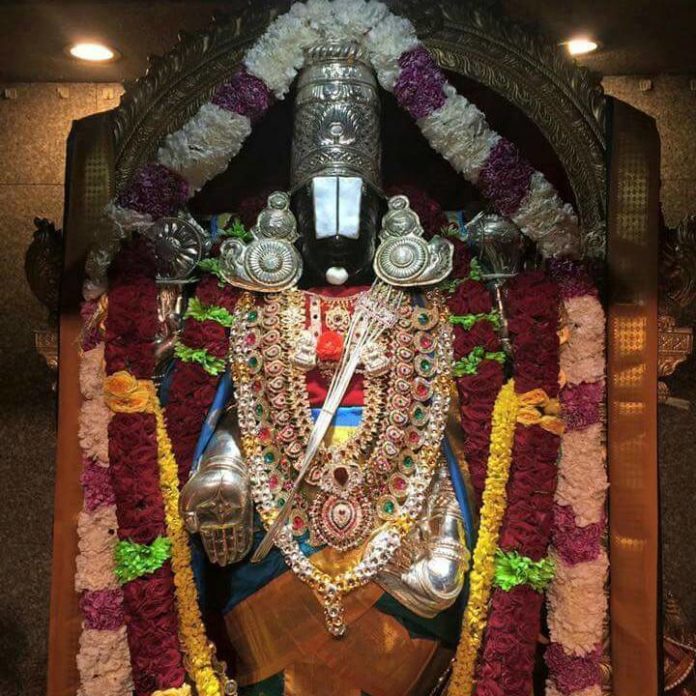 Above all, this great King was a scholarly devotee but at the same time had behaved like an ordinary man and had placed before God an unreasonable desire.. And it is this unreasonable desire that forms the crux of this whole story..

Although this meaningless desire in the great King’s life had finally led to an irreparable tragedy, it however had resulted in heralding the divine entry of Lord Sri Venkateswara into our human world..

With a good rainfall on time every year and also a good cultivation all around his kingdom, the King was a happy man both in his family affairs and also in his kingly affairs..

The King has a lovely daughter too who was the cynosure of all the eyes of the King’s vast kingdom.. With so many good things happening in his life and with so many happy faces all around him, the King neither had any complaint to make in his life nor had any issue to worry about.

Life in a way was on a song not only for the great King but was also for his beautiful queens; his kinsmen; his courtiers; and also for all his fellow country men and women,

Until one dark day..

And here’s that unreasonable desire which the great King had placed before the God on that darkest day of his life..

How unfair a desire to place before God and how unrealistic was it for God to consider..??

The great King, as said earlier, was a great philosopher too and knows pretty well that,

“Happiness and unhappiness; pleasure and pain; well health and ill health; prosperity and poverty; successes and failures; rising and falling; birth and death; union and separation are all different shades of human life which every human being born on this planet should unconditionally go through and accept – not only with equal magnanimity but also with equal jest – and bow before them considering them as the commandments of God”

But unfortunately, the King had placed before God a meaningless desire to grant him a life full of only happiness and not any unhappiness.. An ordinary man may request God to grant such a boon but not a great Gnani like this King who knows pretty well that no human being in the history of humanity was ever granted such a boon.

And as fate would have it, the King’s life had thereupon took a drastic turn as he had started encountering a series of endless tragedies in his life, one after the other. 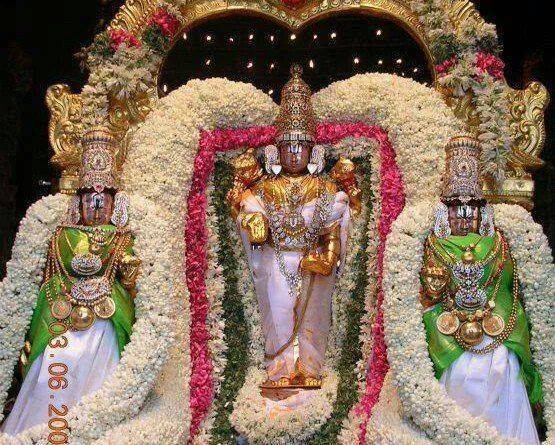 The King’s younger brother, who was until then handling all the responsibilities related to the kingdom, had died in extremely tragic circumstances.. Unable to bear with the trauma of separation from her beloved husband, the King’s brother’s wife too died in just a few weeks of time.

This king’s brother had three lovely daughters and with the loss of both their parents in a short gap had brought endless sorrow to the King.. For a noble man who had not seen any such tragedy in his past, this tragedy was a huge one to handle

Additionally, he is burdened with the responsibility of not only bringing up his brother’s daughters but also of performing their marriages as well.. This of course was in addition to the king’s own daughter’s marriage. The king now has enough reasons to worry about in life, due to which reason he was unable to focus on the administrative matters of his kingdom.

Finally one day, the King just broke down and broke down beyond consolable limits looking into all the corners of this vast world for a little help and a little guidance.. All that the ageing King, at that point of time, asking God was,

“O’ God.. Please forgive me for all the sins I may have knowingly or unknowingly committed in this life.. O’ God am now seeing a tragedy that’s giving me a suffering enough for many more lives to come.. O’ God my only worry now is about my daughters..

But the King again knows pretty well that he’s asking God a bit too much and also knows that his wishes may never come true. This thought gave the King more sorrow and made him more restless.. But the poor King, at that point of time, was unaware that his wishes are actually going to come true just exactly the way he was wishing them to come true.

A great Maha Rishi (Maharshi or Holy Sage), as though instructed by God, had walked into the King’s palace.. This Maharshi was also the crucial adviser and Spiritual Guru of the King whom the King often relies upon for many of his administrative issues.. Although the sudden arrival of the Mahrshi surprised the King it however gave him immense relief from his endless sorrow..

The King then shared all his woes with the Maharshi.. The Maharshi smiled and said..

“Hey Raja.. Every problem in Nature has a solution, every pain has a relief and every sorrow an ending.. Nothing lasts forever not even your troubles.. There’s a poetic justice in every deed of God and Nature always works in accordance with that.. Am surprised a Maha Gnani like you doesn’t even know this important cosmic theory”..

The great King now started seeing some light in darkness, as the Maharshi continued…

“Raja..There’s only one solution to all your problems.. I shall now tell you in detail about the sanctity of the Venkatadri hills and about the holiness of Lord Sri Venkateswara”.. Interrupting the Maharshi, the King asked,”Swamy..Please forgive me for my ignorance.. But who is Lord Venkateswara..??.. I haven’t heard anything about Him before”

“Lord Vishnu is going to take the form of Lord Venkateswara in Kali Yuga to protect His devotees from the sins of this most dangerous Yuga.. He would be residing on the Venkatadri hills till the end of the 28th Kali Yuga..

This form of Lord Vishnu is also going to be the strongest and the most powerful of all His incarnations.. Anyone who listens to the story of this Holy Lord Venkateswara would find an immediate solution to all their problems.

This story of Lord Sri Venkateswara has the power to heal incurable diseases; solve financial problems; get the unmarried married; lend harmony to marital life; regain lost property and offer children to the childless couple.

There’s no problem in this universe that cannot be solved by listening to this story.. Even in the Deva Loka (Celestial World) many angels, including Lord Brahma and Lord Indra, have listened to Lord Venkateswara’s story whenever they thought they have an unsolvable problem in front of them.

I shall now tell you this great story of Lord Sri Venkateswara and His glory.. Pay all your attention to me and listen to this story carefully”

Saying so, the Maharshi during those Golden, historic and divine moments had started revealing the story of Lord Sri Venkateswara to the great King.. Firstly, the Maharshi began his story with the description of the seven hills and later narrated the complete story of the holy Lord to the King.

Listening to that holy story of Lord Sri Venkateswara made the King immensely happy.. With his eyes full of tears he at the end of the story had prostrated before the holy feet of the great Maharshi and took his blessings.

This narration by the great Maharshi to the great King became the first historic narration of the story of Lord Sri Venkateswara on the human world.. And it is also through this narration that we all came to know about the holy Lord and His glory..

After listening to this sacred story, all the problems of the King have vanished and all his four daughters, as was desired by the King, have been married to four great warrior brothers belonging to a great kingdom.

Most of you must have by now guessed who that great King was but let me now tell you that the great King was none other than Seeradhwaj Janaka, more popularly known as Raja Janaka or King Janaka, the powerful King of Videha.

Let me also tell you that Janaka (means King or ruler) is only a title and not a name.. Seeradhwaj Janaka was the twenty second king of Videha.. Raja Janaka’s beloved daughter, as you all may be knowing, was Goddess Sita who was later married to Lord Rama in a Swayamvar.

And Now Here’s The Shocking Conclusion To The Whole Story

The entire tragedy that occurred in the life of King Janaka was experienced by the King only in his dream and not in reality.. The King, in his dream had actually seen his brother and his wife surrendering to death and had also seen their daughters weeping, heart broken.

Disturbed by the dream, King Janaka woke up immediately and after that day for many days could not sleep properly until the day the Maharshi had come to his palace.. Dreams in those days were considered as coming events casting their shadows hence the King Janaka was full of sorrow and worried about his daughters.

On the other hand, the Maharshi in the above story – who was Sage Satananda, son of Sage Gautama and Ahalya – with his divine powers could simultaneously see the dream of his disciple Janaka.

Satananda explored further with his divine powers and was shocked to find that the King Janaka had not just seen the dream but had actually seen his future and this dream tragedy is about to come true at the earliest in King Janaka’s life.

The Maharshi could finally realize that the time had now come for Janaka to listen to the story of Lord Sri Venkateswara without which it would be impossible for him (Maharshi) to thwart away that forthcoming doom in his life. Sage Satananda was also aware that the King Janaka is a great yogi by himself and he too must have by then certainly realized that the tragedy, he had seen in his dream, may come true at any moment.

Maharshi Satananda could also further see the future of Janaka and have again realized that unless Janaka listens to the story of Lord Sri Venkateswara he cannot gain the good fortune of having Lord Rama as his son in law and unless Lord Rama becomes the son in law of Janaka, his mother (Satananda’s mother) Ahalya cannot be exonerated from the curse imposed upon her by her husband Sage Gautama.

With so many divine responsibilities to handle and with so many cosmic schemes to be executed, the holy Maharshi Satananda without wasting a moment had rushed straight to King Janaka’s palace.. What all happened later is now part of history which almost everyone of us know.. PERIOD