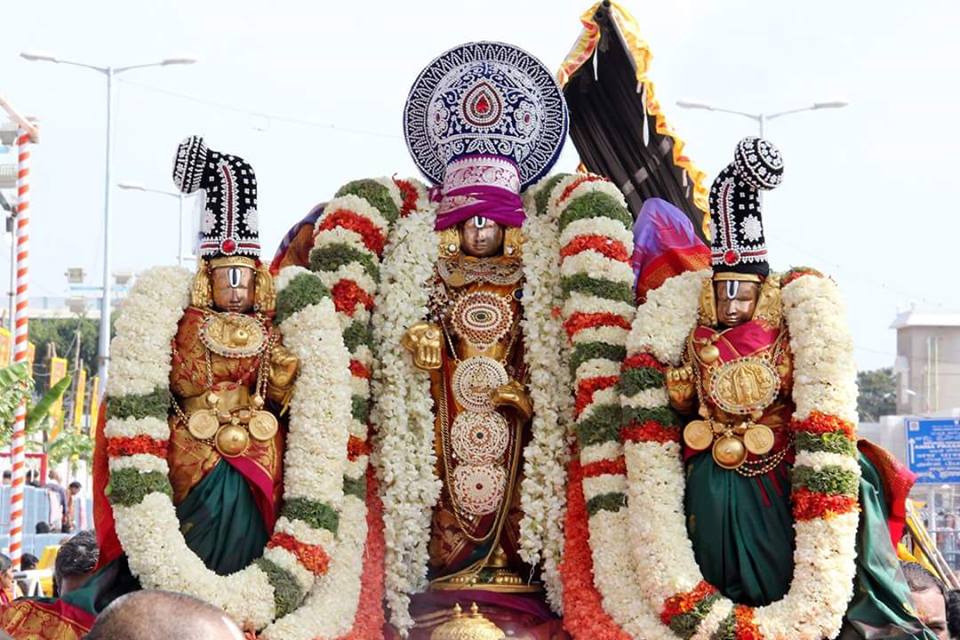 Here are some of those rare and amazing HD images of our beloved Sri Varu (Lord Sri Venkateswara) captured while He was sporting different colorful attires and going around the Tirumala Temple streets riding on different types of Vahanams ( Vehicles or Chariots) during the Brahmotsavams,2015 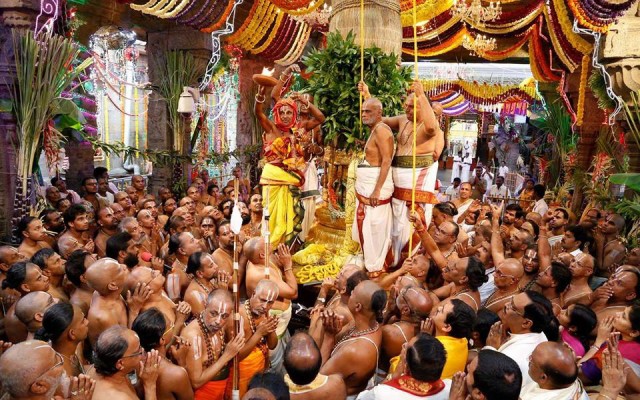 This procedure called DHWAJAROHANAM,is performed on the first day of Tirumala Brahmotsavams which heralds the beginning of this most sacred event on the planet..Amid chanting of Vedic hymns by all the Temple priests,the chief Temple priest is seen here conducting the procedure of Dhwajarohanam, on the first day,to the Dhwaja Sthambham (Flag Staff) that’s there in the Sanctum Sanctorum area of the main Tirumala Temple.. 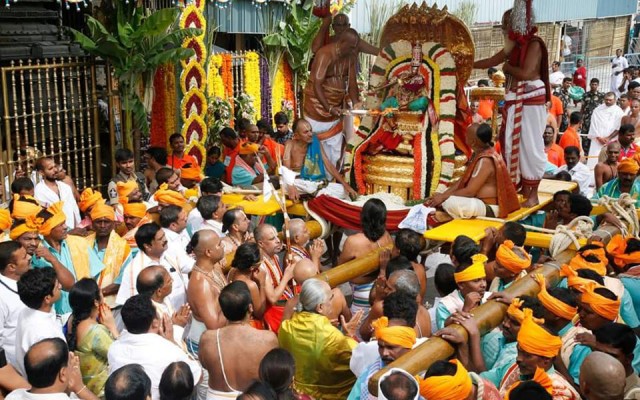 On the morning of the second day,the Lord is seen here being taken out in a procession around the ‘Mada’ streets of the Tirumala Temple in a Chariot called Chinna Sesha Vahanam..Later in the evening the Lord was again taken out in a procession on Hamsa (Swan) as his Chariot..Hamsa or swan means ‘pure and it is believed that Hamsa has an extremely great intellectual capabilities and can separate good from bad. 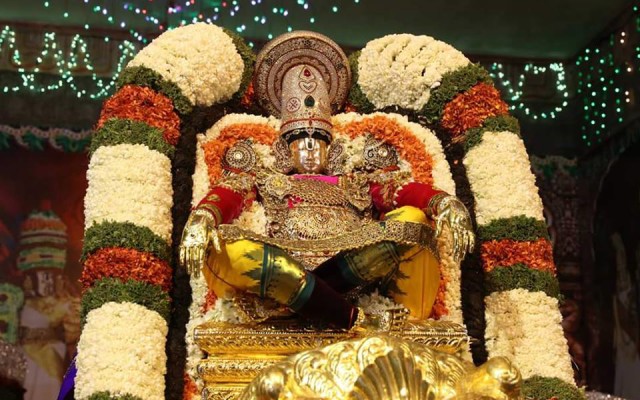 It is this glorious and this aristocratic our beloved Sri Varu looked when He was taken out in a majestic procession around the ‘Mada” streets of the holy Tirumala hill shrine – on His Simha Vahanam – as part of the annual Tirumala Brahmotsavams on the morning of the third day (18th of September, 2015) of the sacred event.. 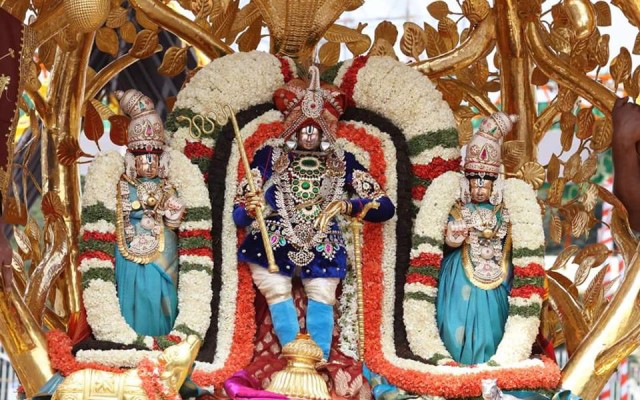 On the morning of the fourth day of the Brahmotsavams,as you may see here,the Lord was taken out in a procession on Kalpa Vriksha as His Chariot signifying that He is the giver of all the boons to his devotees and fulfills all their wishes..On the same evening,the Lord was again taken out in a procession on a Chariot called the Sarva Bhoopala Vahanam signifying that He is the Lord of all Lords in this uuniverse. 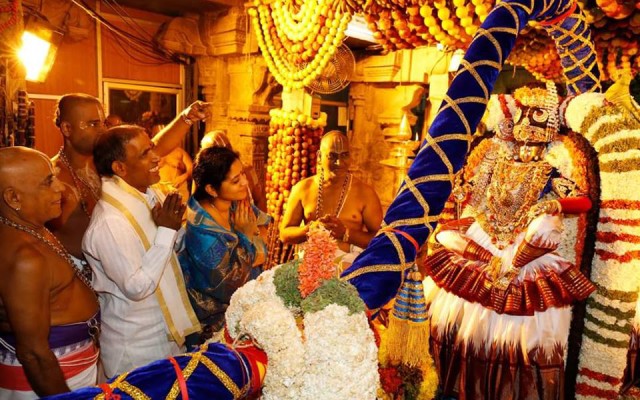 Hundreds of thousands of devotees from different parts of the world converged on the Tirumala hills on the fifth day of the Tirumala Brahmotsavams to witness the Garuda Seva,the most auspicious event of these Bramotsavams..

Sri Varu sported Mohini Avataram in the morning on the fifth day and in the evening was taken around the ‘Mada’ streets – on His favorite Garuda Vahanam in a grand procession much to the delight of these countless devotees who came from all parts of the world to Tirumala to watch this most amazing event.. 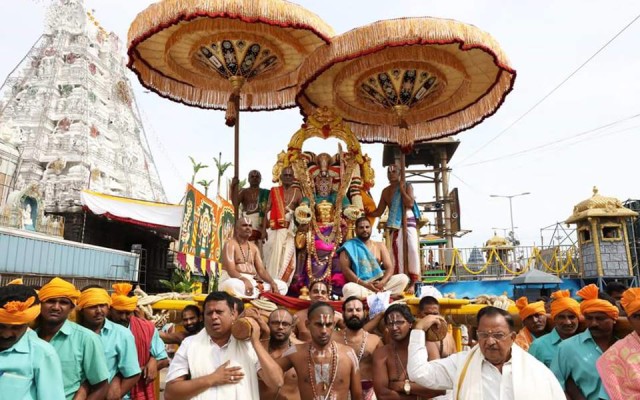 Sri Varu is seen here on the evening of the sixth day being taken out in a procession on His Hanumantha vahanam (A chariot with Lord Hanuman as it’s symbol).. As part of the rituals,the procession pauses for a few minutes at important locations on the hill shrine to facilitate devotees have a closer look at their beloved Lord.. 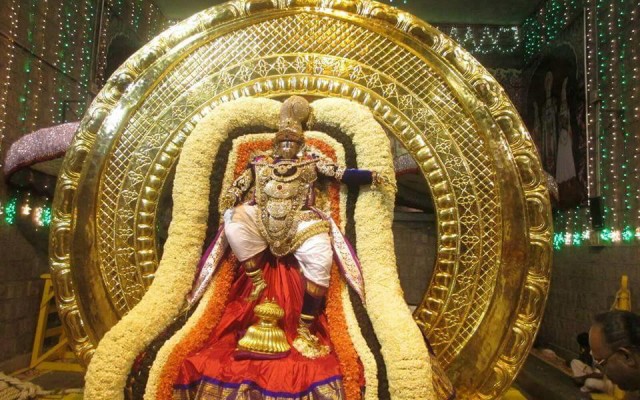 Lord Sri Venkateswara is seen here seated majestically on His Chandra Prabha Vahanam (The vehicle of Moon)..Later,He was taken out in a grand procession on the evening of the seventh day of the annual Brahmotsavams,on this Chariot,around the fully crowded ‘Mada” streets of the Tirumala Temple..

Purusha Sooktham describes Moon God as “Chandrama Maanaso Jaathaha” (Moon is born from the mind of Lord Maha Vishnu)..That means Moon is the commander of our mind and is also a symbol of serenity..Hence it is believed that,”..surrendering unconditionally to Lord Sri Venkateswar’a holy Lotus feet removes all the problems related to our mind and offers it serenity and peace..” 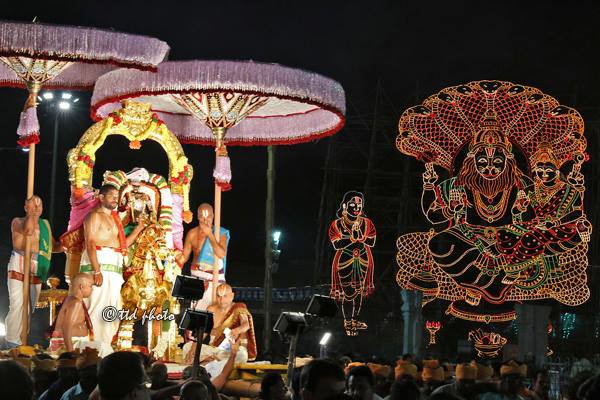 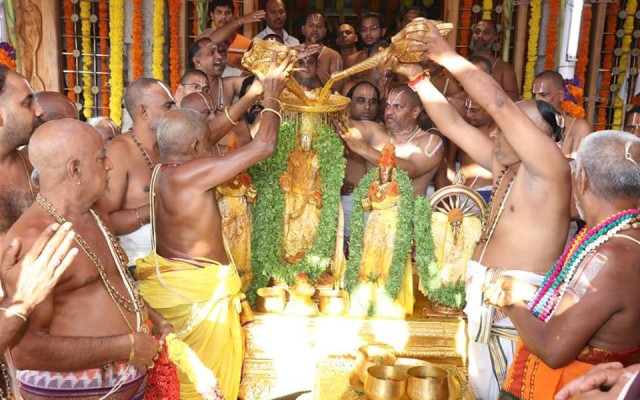 On the morning of the ninth day of the Brahmostavam,a special abhishekam (Chakra Snanam) was held for the Utsava Moorthy (Processional Deity) of Lord Sri Venkateswara and to His divine consorts Sri Devi and Bhoo Devi in the Tirumala Temple…

The Most Stunning And The Most Special Photograph 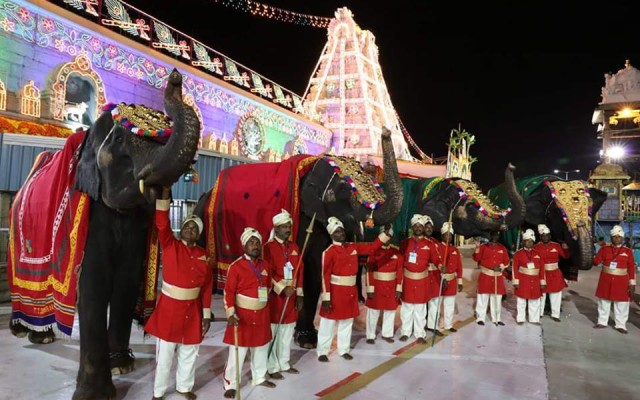 This photograph is perhaps the most stunning and the most special photograph of the entire event.. On the evening of the sixth day of the Brahmotsavams,when Lord Sri Venkateswara was being taken out in a procession on His Gaja Vahanam (Chariot with Elephant as symbol),these holy Temple Elephants,much to the delight of all the devotees,have raised their trunks on their own in honor of the Holy Lord Sri Venkateswara and offered HIM their humble salutations..