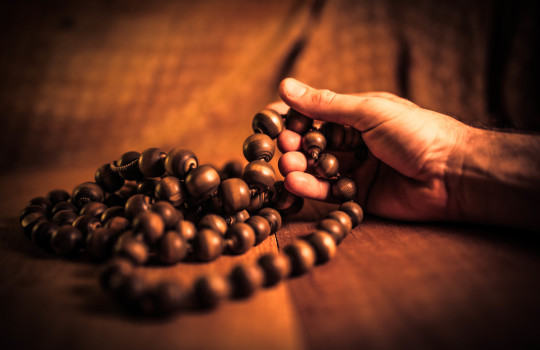 Please Click Here to read the prologue and the first part of this shocking true story..

Please go ahead with this part of the story..Now

After successfully performing his only daughter,Aparna’s marriage with Gayathri Vara Prasad,the mystic Brahmin Subbarao was left with a little more time to spend on chanting the Gayathri Mantra..He had put all that time to good use by increasing the number of hours of his chanting..This resulted in rapidly increasing the total count too..

When Subbarao was chanting the Gayathri Mantra, while sitting in his personal pooja room, he felt a few sudden jerks and a few more mild tremors in his body..However,he didn’t stop his chanting of the divine Gaythri Manthra as he knows he shouldn’t..

But taking all his five senses into complete control the invisible divine female voice,that gave instructions to him earlier to chant the Gayathri Manthra,was heard once again in that room..A shocked Subbarao,who heard that voice after so many years quickly opened his eyes..And the divine voice said in the same musical tone..

“.Dear Subbarao..Am immensely happy with the spiritual discipline you are chanting the Gayathri Manthra..Now I want you to go to Baasara,a holy place on the banks of River Godavari..This place belongs to Goddess Gnana Saraswathi Devi..Sage Veda Vyasa performed a great penance on the banks of this river and it was He who inducted the idol of Goddess Saraswathi there in the Temple and gave her the name Gnana Saraswathi..”

“..Continue your chanting of the Gayathri Mantra there in the presence of Her Holiness of Vedic Learning,Gnana Saraswathi Devi..You shall be immensely blessed Subbarao ..Go”

For a few minutes initially and for a few more hours later,Subbarao could neither understand what he heard from the divine voice nor could he comprehend the content in that message..In a way Subbarao was in a state of terrible confusion..Of course there are two valid reasons for Subbarao to be so confused..

One..Although he heard a couple of times earlier about Baasara Temple,he wasn’t however sure where exactly Baasara is and how to go there..

Two..Even though it’s not impossible to find out and locate where Baasara is,he’s still not able to understand why is that Goddess Gayathri is asking him to go to a place like Basara that belongs to another Goddess Saraswathi..

“..Am a devotee of Gayathri and Gayathri alone..Unless I get a clear message from Her I shall not visit another Goddesses’s Temple however holy that might be..Why should I and why would I..I may be wrong but am what I am..” a stubborn Subbarao told himself..

Which is why She planned something this way to help Subbarao understand what She was trying to convey..

That night and for a couple of more nights too,Subbarao,as we all humans do,slept happily without worrying much about what the divine female voice told him that morning..And on the fourth day,while he was searching for some Mathematics papers in his bookshelf,a small piece of an old newspaper clipping slipped off the shelf and fell down on the floor..

Subbarao bent down; picked up the paper; and casually went through it’s content..Later,after reading the whole content in that small piece of newspaper,Subbarao remained completely frozen for a few seconds,,The following content was there in that paper clipping..

That was a piece from an article about Goddess Gayathri and the Gayathri Manthra..”..The message is loud and clear..”,Subbarao told himself..Without wasting any more time,he immediately called his father-in-law and gathered a few details about the Basara Temple..

Subbarao’s in – laws have earlier visited Baasara a couple of times hence they could give him some vital information about that holy place..They also gave him the contact details of an important employee working there..Subbarao,after due consultations with his beloved wife,Venkata Lakshmi,scheduled his program to Baasara..

Right at this point,neither Subbarao nor you – my beloved reader – are aware what sort of unbelievably shocking and hair rising experiences Subbarao is going to have during his forty days stay in Baasara,one of the holiest places in the world..

But before that it’s very much important for each one of you to know a few valid points about Baasara..

Baasara,is a small Temple town on the banks of River Godavari in Adilabad,a still much ignored and under developed district that currently belongs to the newly formed Indian state of Telangana..Goddess Saraswathi is the principal deity of this holy Temple which is one of the two most powerful Goddess Saraswathi Temples located in India..The second temple is in the state of Jammu and Kashmir..

It is believed that after the great war of Mahabharatha,Sage Veda Vyasa wanted to meditate at a serene place ..After a prolonged search,He found this place suitable for His mediation and settled here along with many of His disciples..He performed penance at this holy place for many years after which period He acquired great Gnana (A Sanskrit word which means knowledge) about many things He didn’t know earlier…

Surprised with the power of the place,Sage Veda Vyasa very much felt the presence of Goddess Saraswathi,the Hindu Goddess of learning and knowledge,at this place..He immediately collected a little sand from the banks of the River Godavari and sculpted out of it an amazing sand idol of Goddess Saraswathi..

Later,using His divine powers,Sage Veda Vyasa infused life into that sand idol and inducted it at a sacred place where currently the principal deity of Goddess Gnana Sarasawathi is seated in Baasara..Quite incidentally,while inducting the idol of Goddess Saraswathi,Sage Veda Vyasa without His knowledge chanted a powerful Sloka thus invoking Goddess Saraswathi into the idol..

In course of time this Sloka became very popular among the devotees of Goddess Saraswathi..According to Sage Veda Vyasa “..a regular recitation of this Sloka grants immense knowledge and education to it’s chanter and makes him extremely knowledgeable about many aspects of life..”

Since Sage Veda Vyasa performed penance at this place and offered prayers to Goddess Saraswathi here,this holy place got the name ‘Vaasara’ which,with the passing of time and with the influence of the Marathi language spoken here,became ‘Baasara’..

Finally,here’s the Sloka which Sage Veda Vyasa had involuntarily recited while inducting Goddess Saraswathi at the Baasara Temple…

Please note..All the students and those who are in the field of creativity,education and entertainment would benefit immensely if they recite this Sloka at least four times in a day..I have been reciting this Sloka everyday for the last twenty five years and I firmly believe that it is the power of this Sloka that is helping me a great deal in whatever little am writing today..PERIOD

Now let us come back to the main story ..

Subbarao,along with his wife,Venkata Lakshmi,reached the holy place of Basara..After a lot of exercise,Subbarao could find accommodation in a small room just beside a Cow shed in Basara..

It was the beginning of summer that time in India and Subbarao’s father-in-law had very clearly cautioned him,much before his leaving for Baasara,saying,”..In a peak summer,temperatures would reach 45 to 46 degrees Centigrade in Baasara and if you don’t take enough precautions life would be miserable for both of you..”..

Subbarao smiled and moved ahead..

According to Hindu Dharma Sastras any meditation or penance,here in this case called Deeksha,should be performed for at least forty days.. Despite knowing well that it’s going to be a terrible Summer in Baasara,Subbarao and his wife have still decided to go ahead and stay there in Baasara for all the forty days..

At last,Subbarao started his meditation in his room at about 4.30 am on the 4th of April.2002..He was,at that moment,not aware how miserable life is going to be for them during their forty days stay in Baasara..He was also not aware how many amazing experiences he’s going to have during that stay and how many times he’s going to converse with Goddess Gayathri ..

It was only after passing through many number of unbearable problems that Goddess Gayathri explained Subbarao in detail why She instructed him to go and meditate at a powerful place like Baasara where Sage Veda Vyasa performed penance and where He inducted the holy idol of Goddess Gnana Saraswathi..

Before knowing all that my friend

I want you to know something very important here..None of the experiences Subbarao had in Baasara were revealed so far to the world for some divine reasons..They are not mentioned even in the Telugu story Sri PVRK had posted in SWATHI Telugu weekly..

It took three hours for me to read all those old papers written in Telugu with a blue ink pen..

Anywayz,please continue reading by Clicking Here..It takes you to Shocking True Story Of A Mystic Brahmin Who Converses With Goddess Gayathri – Part Three