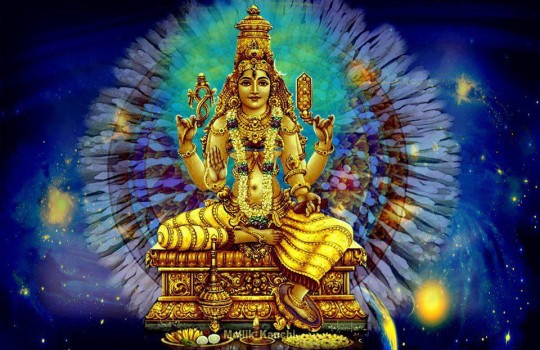 Please Click Here to read the previous parts of this story

On that eventful day..

After the divine Goddess Gayathri asked the mystic Brahmin Nemani Subbarao to go to Naimisaranyam, Subbarao sat down in the evening – all alone at his residence – and did quite a lot of calculation to figure out everything about his trip to that most sacred place on the earth..

After about an hour,Subbarao could finally spring up with some plan of action required to go to those sacred forests..However there was one big question that was constantly knocking hard on the bright walls of that great Mathematics genius’s mind..

“..How to convince Lakshmi to come with me to Naimisaranyam..??..”

As per his plan,the next day,he immediately called one of his elderly aunts in Hyderabad..

This elderly lady,whose name it is not necessary to mention here,commands quite a lot of respect among all the relatives of Subbarao as well as Venkata Lakshmi..

Although much witty in Nature this lady is an extremely devotional lady with abundant knowledge of almost all the aspects of Hindu religion and philosophy..She’s revered by many,among the relatives of Subbarao,as a very enlightened spiritual personality..

When Subbarao called the elderly lady,she immediately picked the phone as though she was waiting for his call..Subbarao slowly conveyed her what he wanted to convey,after the initial greeting formalities are complete…

“..Pinnee (Mausee)..You know well that am not only following the instructions of Goddess Gayathri but also going wherever She’s asking me to go..You also know well that myself and Lakshmi recently went to Basara where I performed penance for forty days..

Pinnee..Now Mother Gayathri is asking me to go to the sacred Naimisaranyam forests and continue my penance there..Although am very happy about Mother’s instructions,am unable to know how to convey the same to Lakshmi..I also don’t know what would be her reaction if I ask her to come with me to such dark and dangerous forests..

Pinnee,you know well..Without Lakshmi I alone cannot go there nor will she allow me to go..Don’t know what to do now..She’s currently in Hyderabad and may come to your house any moment..So please help me and on my behalf talk to Lakshmi and convince her to come with me to Naimisaranyam..”

After carefully listening to what Subbarao had said,

This was what the elderly lady in her reply,said..

“Oreyi Abbaayi..Did Mother ask you to go to Naimisaranyam..??..What a great place that is on the earth raa ..No way..Whether or not you allow us,oreyi abbaayi,myself and your uncle will certainly come there with you..We shall all go together and stay there for all the forty days..Now don’t say a word more..”

Scratching his head and trying hard to hide the impatience in his voice,Subbarao said,

“..Pinnneeeeeeee.. Pinneeee..Listen to me first..You and babai (uncle) may certainly join me..Why would I say no..In fact,I will be very happy to take you both there..At least am confident that after seeing you no wild animal will dare come close to us…But that is not the point here..First..Please listen to me properly and understand what am trying to say..”

“..Oreyi Panthuloo..(Panthuloo is the pet name of Sri Subbarao..That is how the elders in his family call him..That is also how the holy Goddess Gayathri addresses him but for the convenience of many non Telugu speaking readers am using the term Subbarao)

You didn’t change a bit since your childhood..You still get irritated very easily..Now tell me what is your problem..??..” asked the elderly lady,laughing loudly..

Trying to hide his irritation,Subbarao said,

“..Pinnee..I didn’t call you to invite you to Naimisaranyam..Okay..Am not going there on a picnic either.. My problem is,am unable to know how to convey this to Lakshmi..She’s sensitive and am sure cannot weather the jungle atmosphere there..Also not sure whether she says okay or not..That’s why am asking you to tell her on my behalf about this trip to Naimisaranyam and convince her to come with me..”

The same evening Venkata Lakshmi took the next available train to Visakhapatnam and reached home..

After Subbarao completed his daily meditation of the sacred Gayathri Manthra,Venkata Lakshmi asked him..

“..What is this new trip Maastaaru…That too to the great Naimisaranyam forests about which we only read in puranas..When did Mother tell you to go there..??..”

In a low tone Subbarao replied,”..Day before yesterday after I finished the  morning Sandjyavandanam and pooja,Mother suddenly told me to go to Naimisaranyam and perform penance there..For forty days..”..

“..Forty days..??..That too in dangerous forests like Naimisaranyam..??..How is it possible Maastaaru..” a fully confused Venkata Lakshmi asked Subbarao..

“Maastaaru..How can you say no to Goddess Gayathri and how can I say no to you..Wherever you go you will have to go with me and I will have to come with you..That’s all..No need for any one however elderly they are to us to come in between and convince me on that matter..Whether it’s to a temple town like Basara or to terrible forests like Naimisaranyam am going to be with you..”

What can any husband in this world would say after listening to such firm and affectionate statement from his wife and why would any husband need to worry if he has a very noble and supportive wife like Venkata Lakshmi ready to accompany her husband even to the most dangerous forests like the Naimisaranyam in spite of extremely unlivable conditions there..PERIOD

Without wasting any more time,the meticulous Subbarao swung into immediate action and called on phone a few more of his relatives to know whether they would be interested in joining them in their trip to Naimisaranyam..

One of Subbarao’s aunts,who stays in Rajahmundry,and who is also spiritually a well enlightened elderly lady said,”..Very happy to hear about the trip to the sacred forests raa Panthuloo..Myself and your uncle will certainly join you all..It’s an age old desire for both of us to visit the Naimisaranyam forests..

Now we got a God given opportunity through you to go there..Thanks for the invitation raa abbaayi.. However,my dear Panthuloo due to our old age problems we may not be able to stay there for the full forty days..Weshall  perform “Bhagavatha Saptaham” there and then return to our place after about ten days..Is that okay with you”

(“Bhagavatha Saptaham” is a spiritual practice that was first launched,several thousands of years ago,in the sacred forests of Naimisaranyam by the holy celestial sage Narada Mahamuni..Veda Vyasa wrote “Maha Bhagavatha” and on the instructions of sage Narada passed it to the human world through his illustrious son Suka Maharshi..

It is a belief among millions of followers of Hindu path of spirituality that if they recite rather read the “Maha Bhagavatha” slokas reverentially for a week,all their sins would go and all their wishes will fulfill..

Therefore,recitation of Bhagavatha slokas,continuously for a week,is called the “”Bhagavatha Saptaham” .. And if the same is performed at a sacred place like the Naimisaranyam,it is believed,the chanters would by all means attain salvation also called the “Moksha”..)

A fully delighted Subbarao repled,”Why not Pinnee..Am glad that you have agreed to join us..You may return whenever you want to..Will confirm the dates and let you know..”

Later,Subbarao called a couple of more elderly relatives who immediately expressed their willingness to join Subbarao in his great spiritual journey..

After taking confirmations from all his relatives,Subbarao did a little more home work and a few more calculations and had finally decided to go to Naimisaranyam in the month of April,2004 of course after completion of the annual examinations of his students..

All this happened in the month of December,2003 during which time Subbarao had scheduled the program for April,2004 and it was

Exactly at that point..

After Subbarao had finalized everything for the trip that his wife Venkata Lakshmi raised a very complicated question..

“..Maastaaru..Many are saying that our staple rice will not be available there in Naimisaranyam..Since it is a part of the Northern India region,many people there eat only Wheat chapathis all the time in the day which would be very difficult for South Indians like us to eat both during lunch time as well as the dinner time..

How can we digest so many Chapathis in a day..??..Even otherwise too much of Wheat consumption generates a lot of body heat..Then what shall we eat there Maastaaru and how to survive so for forty long days..Am afraid..Really really afraid..”

“..Let us see Lakshmi..Our Mother who asked us to go there must certainly be having some plans for us so why should we worry..Let us leave everything to Her..She will take care of us..Don’t worry..”

Although Subbarao said so to convince his wife he too was a worried man about the availability of food there in Naimisaranyam.. He couldn’t sleep peacefully that night..

Both Subbarao and Venkata Lakshmi got up at their usual time of 4 a m and finished off their morning chores..Later Subbarao sat for his meditation and recited the sacred Gayathri Manthra up to about 9 a m..

After finishing the last part of the rituals in the recitation,Subbarao was about to get up and it was exactly at that time

The musical,magical,mystical and the most mesmerizing divine voice of Goddess Gayathri uttered in Subbarao’s ears..

And this was what the divine voice said..

(Please bear with me..Just to retain the sweetness of what the divine Mother had said during those divine moments am presenting the Telugu words here as they are sent to me by Sri Subbarao..This was exactly what the mother said in Telugu language..)

“..Dear Subbarao you are going there to perform penance..So you should not worry about what food would be available there for you and what would be not..For what it is worth carry some puffed rice with you while going there..”

Subbarao literally danced for a few minutes..He realized that Goddes Gayathri was observing every moment of his life..He quickly conveyed the same to a much worried Venkata Lakshmi..She too felt immensely happy..

After making all the arrangements and working out all the plans a group of nine members,including Subbarao and Venkata Lakshmi,left for the most sacred place on this Earth,the Naimisaranyam forests by Gorakhpur Express from Hyderabad..

And this marks the beginning of the spine chilling journey of Naimisaranyam by the mystic Brahmin Nemani Subbarao and his holy gang..