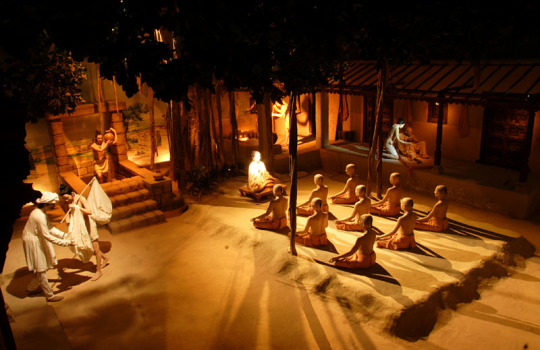 “..It doesn’t mean what the human mind cannot comprehend do not exist..”..

Please click here to read the previous parts of this story..

Before proceeding to read this part of the story,please give me a moment and forgive me for the mistakes that I have inadvertently committed while writing the previous part of this story..I’m asked to correct these errors,not by the mystic Brahmin Sri Subbarao but by the holy Goddess Sri Gayathri Herself..

Sri Subbarao called me at about 8.15 on the morning of 10th December,2014..For over thirty years now the time between 6.30 am and 9.30 am is the time Sri Subbarao spends in recitation of the Gayathri Manthra..That is what both Sri PVRK Prasad and Sri Subbarao himself told me..Then how come he’s calling me at 8.15 am..I was amused..

Initially,after attending the call,I have noticed a lot of hesitation in Sri Subbarao’s voice..I have clearly understood that he was trying to convey something to me but was hesitant to do so..Observing his hesitation,I told him to feel free with me and treat me like his own family member and convey whatever he wants to convey…

During that spine chilling forty minutes conversation,Sri Subbarao on behalf of Goddess Gayathri told me about the necessary corrections that I need to carry out and incorporate into this part of the story..

For a few moments I was too benumbed to understand what mistakes of mine Sri Subbarao was referring to.Later it took a few more minutes for me to finally understand what he was trying to tell me..In the end,I have just remained frozen and speechless..

Hold your breath..This is what the mystic Brahmin Sri Subbarao told me..

“..I heard Mother’s voice in the morning today..She said..”..Aditya  had given a very apt title to the story..He is also writing the story well and is conveying the devotional message to the world the way I wanted it be conveyed..”

I know Sri Subbarao and Goddess Gayathri converse with each other as often as any son and mother in this world would do..But this is something too unbelievable to be believable and too incredible to be credible for me..Therefore I was shocked first..Stunned next..And caught speechless in the last…

Finally,after assimilating all the matter the mystic Brahmin has conveyed to me,I wanted to feel joyous,feel emotional,feel ecstatic and feel out of the world and wished my eyes shed some tears to enable me enjoy those golden moments..But I felt neither..

Because…those who are specially disciplined through many hardships in life by Nature are endowed with too much of unwanted worldly knowledge and wisdom which after some point of time in their life make them brutally practical and ruthlessly insensitive ..

Therefore,they cannot emote like all other normal human beings in this world which is why they feel jealous when they see pearls of tear drops in the eyes of the opposite person..

For the first time in my life…I cursed myself for being one among those unfortunate T..H..E..Y….PERIOD

Now..Please Go Through These Corrections

1). I have written in the previous part that “..Since there won’t be many devotees staying in those cottages throughout the year,the canteen there doesn’t guarantee any dining facilities to just a few people like Subbarao who come to stay there..”

CORRECTION : The small cottages where Subbarao and his wife stayed in Baasara were actually meant for the accommodation of devotees belonging to the Brahmin community..Food in these cottages is prepared strictly according to the norms followed by the orthodox Brahmin community..Lunch and dinner are offered free of cost to Brahmins and other Vedic scholars who come to stay in Baasara..This is also the place wherein the holy Pontiffs and priests of the most revered Kanchi Mutt prefer to stay..

2).I have written in the previous part that, “Everyday,after finishing his morning session of mediation,Subbarao,along with his wife,would go to the Goddess Of Saraswathi Temple located on the banks of holy river Godavari in Baasara..Both the wife and husband would spend most of their time there participating in the daily sevas..

CORRECTION : The main purpose behind Subbarao’s visit to Baasara Temple was to mediate the Gayathri Manthra for as many hours and as many times as possible in a day..After taking Coffee at about 7.30 a m Subbarao would relax for a while and then perform his daily ‘Shodsopachara’ nithya pooja for about half an hour..Later,staying in the room he would mediate the Gayathri Manthra from 8.30 am to 12.30 pm while his wife Venkata Lakshmi would go to the cottages’ kitchen to help the kitchen staff prepare food for the scholarly Brahmins,,.

3). I have written tn the previous part that “..In the afternoon from 3 p m to 6 p m Subbarao would sit in the Sanctum Sanctorum of the Temple and recite ‘Mookaa Pancha Sathi’ in praise of Goddess Gnana Saraswathu Devi..”

“..Now..O’ My Divine Mother Gayathri,I have done all the necessary corrections and incorporated them,as desired by You,into this part of the story..Now with Your kind permission,I shall go ahead with this part of the story and continue from where I have left it in the last part..”..BLESSED

This Part Of The Story Begins

After receiving instructions from the holy Goddess Gayathri to alter the Telugu song ‘Lalitha Kalaa Sreemathi..Saraswathee’ to suit Baasara Gnana Saraswathi Devi, Subbarao on one fine morning sat down to alter the lyrics of this song..Here’s the pallavi or mukhda of the original Telugu song which Subbarao had to alter first….

After carefully reading the stanza for about ten times Subbarao got an idea..Then,keeping almost the entire content of the original pallavi intact,Subbarao just removed the word ‘Lavanyavathi’ from the original song and replaced it with ‘Baasara Vasathi’..

Firstly,Subbarao read this stanza once..Then twice..Then thrice..Then fifty times and then hundred times but he couldn’t re create at least one new word out of this original stanza..It was then,looking at heavens,that he prayed to Goddess Gayathri.

“..Mother..Who am I and what is my capacity to alter such a lovely piece of poetic art..Unless you interfere and help me here,how do you think I can replace these intricate words..Please help me Mother..”..But as anticipated by him,Subbarao didn’t get any reply from the Goddess..

Subbarao went to the Saraswathi Temple along with his wife and with great devotion attended all the evening sevas conducted in the Temple..But all through the time,he had spent in the Temple,that  particular stanza was haunting Subbarao,very badly.. Unable to find a proper replacement to the words in that stanza he was growing terribly uneasy and restless minute after minute..

Finally,after the night Aarathi,Subbarao slowly came out of the Temple and started quietly walking back towards his room.. Observing her husband’s unusual silence,Venkat Lakshmi too couldn’t dare to draw him into any conversation..She could feel how restless and uneasy her husband was…

After walking a few paces,Subbarao and Venkata Lakshmi slowly reached the Veda Vyasa Temple that’s there almost adjacent to the main Saraswathi Temple in Baasara..While crossing the Veda Vyasa Temple,Subbarao suddenly stopped walking as though some great force ordered him to do so..It was then that he heard that amazing musical female voice…Again..

And this is what the divine voice said..

“My dear Subbarao..I know how worried you are about replacing that crucial stanza in the original Telugu song..But before going into that aspect of the problem,you need to know a few things about the holy Sage Veda Vyasa..Vyasa Maharshi as He is known to the world,Veda Vyasa is Achaturvadano Brahmah..Dwibahu Raparo Harihi..Aphaala Lochana Sambhuhu,,Bhagawan Baadarayanaha..”

“The holy Sage Veda Vyasa is not only a great devotee of Goddess Saraswathi but He is also swayam Sri Mannarayan in human form..It was He who is responsible for the existence of Gnana Saraswathi Devi Temple here in Baasara..Now tell me my dear Subbarao..Don’t you think it is important to say a few words here in Baasara about this holy Sage in your new song..”

A spellbound Subbarao stood like a statue listening to the divine voice as the invisible female voice continued..

A fully joyous Subbarao prostrated before the holy Temple of Sage Sri Veda Vyasa and swiftly walked back to his room.. Later,he carefully noted down the stanza Goddess Gayathri gave him..Finally and finally indeed Subbarao could get the entire lyrics of the song to his satisfaction..

After that,Subbarao started practicing the old Telugu tune with the new lyrics and in course of time attained complete perfection in singing it..Now his ambition is to present the song in front of Goddess Saraswathi in the Baasara Temple..But at the same time Subbarao knows very well that he’s asking for too much from the Mother Goddess..

Because,unless he’s Mangalampalli Bala Murali Krishna or K.J.Yesudas,it’s impossible for someone like Subbarao to get an easy opportunity to render a Telugu devotional song in front of thousands of devotees who come to the Basara Temple everyday from different parts of the country..

No matter what the logic says,many a time our ambitions dominate our intellect and our desires defy our logic..

Similarly,Subbarao is a human being too and also knows very well that he’s not a great singer..But he still wants to perform as a singer in the Temple to please the holy Goddess Saraswathi..This burning desire in him started burning all his logical thinking qualities thus making him desperate with every passing day..

One evening while walking to the Temple along with his wife Venkata Lakshmi Subbarao silently offered his prayers to Goddess Gayathri and requested Her.

“O’ my divine Mother..You helped me in altering the lyrics of the song..You must now help me to present this song before You in this holy Baasara Temple..I don’t how is it possible but it is your responsibility to fulfill my desire.. Please Mother..Please..”

”“Certainly Subbarao..But you will have to wait until that time comes..” came the reply from the divine female voice that Subbarao heard on that lovely evening filled with serenity..

But how is it possible

However,these are the questions that we humans put forth during many such unusual circumstances but the deeds of the One who created this universe begin exactly at the end of all such silly human questions..

And Goddess Gayathri too started scheming Her things to accommodate Subbarao’s desire in the great cosmic events..And as a first step..She………

Finally,a few words from me..

“..There are many amazing and miraculous events occurring in many parts of this world which the human mind cannot properly comprehend..But..

“..It doesn’t mean what the human mind cannot comprehend do not exist..”.