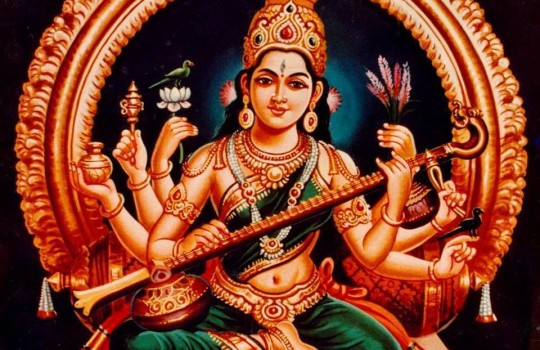 Please Click Here to read the previous parts of this story..

Now please go ahead to read this part

The Basara Temple administration follows a set of rules and assigns duties periodically to Temple priests who offer services to Goddess Gnana Saraswathi Devi in the Temple,everyday..In those days of 2002 – when the mystic Brahmin Subbarao was staying in Basara town,along with his wife Venkata Lakshmi – there were in all about twenty three Brahmin families living there..

Only members of these Brahmin families were eligible to offer services,as priests.to the holy Goddess Gnana Saraswathi..The Temple authorities would select one of the members of these families,as head priest for a certain period of the year,and then select a few more from the list to assist him during the daily rituals…

During almost all the days of the week,these selected priests stand in duty at the Goddess Saraswathi’s holy service for the whole day..Since there will be too much of rush on any given day in the Temple,these middle aged Temple priests,after some point of time in the day,feel terribly exhausted and later start performing all their duties mechanically..

At the end of the day and understandably so these Temple priests always look to wrap up things quickly and go home..

The evenings in the Temple are even more exhausting for the Temple priests as there will be many more elaborate activities to be performed in the Temple like the night Aarathi and the recitation of Manthra Pushpam..

Immediately,after the completion of recitation of the Manthra Pushpam,prasad is distributed to the devotees..During this distribution process,thousands of devotees literally push each other to grab the prasad from the priests..This is the most tiresome process for the Temple priests to perform in a day..

After completion of this process,comes the recitation of ‘Na Mantram..Na Yantram’ slokas written by His Holiness Jagadguru Sri Adi Sankaracharya.. This recitation alone takes a pretty long time for the priests to complete and it’s only after completing this final part of the day,the priests go home..

Although these priests are priests they are humans too and should not be expected to perform any better than this..And there’s no better man than Subbarao to understand that..

“..In the midst of such elaborate and tiresome process in the evening,how will these serious faced middle aged fully exhausted priests give me time,however little that might be,to render my devotional in front of my beloved Goddess Saraswathi in the Temple..”..

After observing all the elaborate activities of the Temple priests,this was what Subbarao thought when Goddess Gayathri assured him of offering a chance to present his song in front of Goddess Saraswathi in the Temple..Unable to find a proper solution to this problem,Subbarao was a much worried man..

But he doesn’t know..

“Every time we humans worry about something in our life the Gods smile..The more we worry the more they smile..Because they know what they have kept in store for us..Because they know how happy we would be,later in our future,after receiving those ‘kept in store ‘ things from God..Therefore,the Gods then are not smiling seeing us worried but are smiling foreseeing our fortunes..”

Similarly Goddess Gayathri too was smiling at that time seeing Subbarao worried..Because She has kept all the steps in Her cosmic game ready to execute..As a result of the first step of Her game,a well learned 20-year old young Vedic Scholar by name Sanjoo was pressed into the holy service of the Basara Temple by the Temple administration,as head priest..

This ever smiling scholarly prodigy ‘Sanjoo’,who was observing Subbarao and his wife Venkata Lakshmi ever since the day they started visiting the Temple,greeted them with a gentle smile when they came to the Temple on that day he assumed charge as the head priest of the Temple..

That was a pleasant surprise for Subbarao,that day,to receive such a broad smile from the head priest of the Temple..Secondly,he was all the more surprised to see a young boy performing services to Goddess Saraswathi..

Then Subbarao,immediately looked at the idol of Goddess Gnana Saraswathi Devi in the Garbha Griha of the Temple and was further more surprised to see a much broader smile on Her face..Then he realized that as promised,his Goddess Gayathri has started scheming things in his favor and is adopting measures to accommodate his singing performance in the Temple..

After about a couple of days..

Goddess Gayathri played the second step of Her cosmic game..As a result,the young head priest Sanjoo spotted the noble couple of Subbarao and Venkata Lakshmi coming to the Temple and inquired about their personal details like,”Who you are..Where you are from..And what you do..”..

Same questions Subbarao too asked the young priest which helped him get a shade closer to him..So far so good but Subbarao knows his limitations as a singer very well..Firstly,he’s not a great singer everyone would die to listen to..Secondly,except the four walls of his bathroom and to a certain extent his wife,no one else heard him singing before….

Since she’s his wife,the poor Venkat Lakshmi has no other option except say “you sing well” whenever he sings in front of her..Subbarao too is wise enough,therefore understands his beloved wife’s predicament.. “Hence,her compliments cannot be taken for granted to assert my singing capabilities..”He thought..

Subbarao doesn’t want to leave anything to chance and started practicing the song seriously whenever he had a little time left in the day after the meditation of the Gayathri Manthra..Although he knows well that Goddess Gayathri shall take care of everything,right from arranging his singing performance in the Temple to actually performing it well there,he still had many doubts in his mind..

“..Am I taking too many chances..Will I be able to sing well in the Temple if at all I get an opportunity to sing there..Above that,there will be many eminent scholars everyday in the Temple in addition to thousands of devotees..”

“.What in case I take off the song on a high note and then collapse midway..??..How shameful that would be for me ..O my divine Mother..You have brought me here so it’s for you to make me sing well in the Temple..”

Divine mother Goddess Gayathri played the third and final step of her cosmic game..As a result a fully prepared Subbarao came to the Basara Temple in the evening,that day,along with his wife..He was about to enter the Temple..

Exactly at the same time,as though sent by Goddess Gayathri,the young priest Sanjoo too was entering the Temple..Watching him entering the Temple,a fully excited Subbarao rushed to him and halted him at the entrance and requested him,

“I want to present a keerthana in front of Goddess Saraswathi today..I have been practicing it for many days to present it before the Goddess..If you can give me a chance today,I shall then present it after the Manthra Pushpam ritual..”

“..Ok..Then sit right in front of the main entrance of the Garbha Griha..After the Manthra Pushpam is complete I shall look at you and then you must start your singing immediately..Be warned..The song should be related to Goddess Saraswathi and you should also sing it well..Otherwise am finished..”said the young priest with a smile..

A fully joyous Subbarao happily nodded his head and rushed into the Temple along with his wife,.They sat at the same place,in front of the main entrance of the Garbha Griha,they normally sit everyday..

Later in the evening..

For a moment he felt as though everyone was preparing to laugh at him..The noise of their loud chanting of Godess Saraswathi’s names was reverberating in his ears..He then looked at the deity of Goddess Saraswathi for a moment; then silently offered his prayers to Her; then closed his eyes; then opened them; then closed again and then opened them..

In a way he was as nervous as a new batsman making his debut at the international level and waiting to face the quick pace attack of the mighty Australian fast bowlers..PERIOD

Many a time in our life we do not observe,but it’s actually the fear of failure that gives us more pain than the actual failure..Subbarao too at that moment was more worried about his failure as a singer than his performance as a singer..

Venkat Lakshmi was silently observing all that was going through not only in her husband’s face but also in his mind..She slowly looked around and found thousands of devotees standing around them..Then she looked at her husband’s face..She found it with closed eyes..She could feel her husband’s nervousness..

On the other end,one after the other,the daily rituals in the Temple were coming to an end..

The devotees were waiting in anticipation to surge ahead to collect the daily prasad..And exactly at the point where the Manthra Pushpam ended,the young priest Sanjoo immediately looked at Subbarao as an indication to begin his singing..

And exactly at the same point.Subbarao who was curiously waiting for that signal from Sanjoo,began singing the amazing ‘Lalitha kala sreemathi,Saraswathee..’..

Firstly,the devotees rushing to collect the Prasad,didn’t understand what was happening..Later when they did,they just remained standing where they were until that time and started paying attention to the mesmerizing voice of Subbarao..

Suddenly the cacophony that ruled the place in the Temple until that moment turned silent..Then it was only Subbarao’s singing voice that’s heard all over the Temple premises there..With his eyes fully closed Subbarao was singing as though a great singer was sitting in a trance and singing..

Subbarao remained unmoved in a state of shock for a long time later,not because he sang the entire song much better than he expected..Not because of the thunderous response he was receiving from every one..

It means Subbarao without his knowledge and without any preparation earlier included his name too in the signing off note (called ‘Makutam’ in Telugu) of the song..B T W the meaning of ‘Subrahmanya’ and ‘Subbarao’ are one at the same..In fact,they are the two other names of Lord Murugan or Lord Karthikeya..

This was the master stroke played by Goddess Gayathri in the whole of Her cosmic game to please Her beloved devotee Subbarao..All those were very special and memorable moments for Subbarao in his life narrating which to me he breaks down even today..

A fully joyous Subbarao with his more joyous wife Vekata Lakshmi returned to his room a much happy man..He couldn’t believe anything that just happened like a dream an hour before..He finally retired to his bed a much contented man after heart fully thanking his Divine mother Goddess Gayathri..

Now..Goddess Gayathri smiled..Smiled not because She was seeing a happy Subbarao sleeping but because She was foreseeing a shocked Subbarao’s reaction to a great spine chilling experience She’s going to give him a couple of days later..