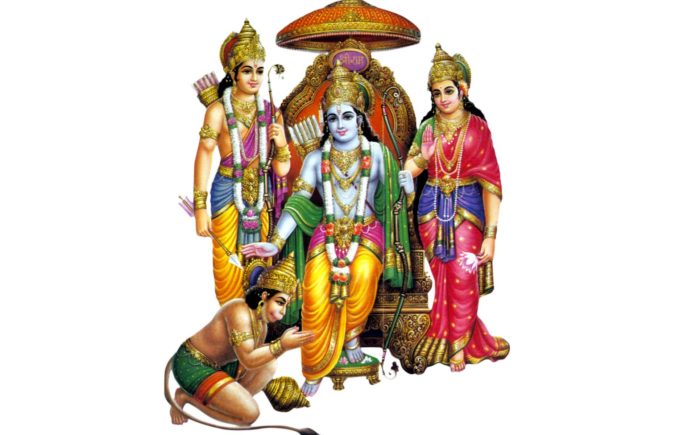 When Bhagawan Srirama Chandra Murthy asked Hanuman, “Who are you, a Man or a Monkey”, Parama Bhaktha Hanuman bowed his head, folded His hands and offering His Pranams to His Sriram, said, “When I do not know who I am, I serve You; and when I know who I am, You and I are One” – Tulasi Das Ramayan

It was exactly this amazing krithi – that I have grown up listening to from my beloved Mother – that my inner voice had inadvertently started rendering while listening to that noble lady’s voice which at that moment was telling me about the devotion of her beloved father towards his Lord Sriram.

What was she telling me that moment..??

I received a call on my mobile from an unknown landline number in Hyderabad.. Casually accepting the call, I said, “hello”..

In a slightly confused tone rather a hesitant tone, I asked her, “Am so sorry Suseela garu.. Unable to recognize your voice.. Which Satya you are referring to..??”

Bursting into a huge laughter, I said,”What a pleasant surprise.. I never spoke to you over phone so could not easily recognize your voice.. Really sorry about that.. Please don’t mind”..

Saying, “That’s okay.. I can understand.. We are celebrating our Mother’s 75th birthday this Sunday.. I called you to invite you and your family to join us for a lunch that day.. It’s a surprise party to our Mother, so, inviting only select people.. Please don’t disappoint us”.. PERIOD

Until that day of 9th June, 2018, I know Mrs Suseela only as my beloved friend Satya’s wife but after that conversation with her that day my equation with her had completely changed..

Before taking you into the main story, I must first tell you a little about my friendship with my beloved Satya.. In our mad world of Cricket, Satya is a close friend of mine for more than fifteen years.

We all would meet every Sunday, week after week for many years, for our weekly Cricket in the Masab Tank area of Hyderabad and would later spend the post Cricket evenings hanging out in a nearby cafe or in a pub in the same area..

On many occasions during those Cricket playing days, whenever I would visit Satya’s flat in the Vijaya Nagar Colony of Hyderabad, Mrs Suseela would serve me nice lunch with amazing Andhra pickles and a mouth watering Rasam made with a pungent dose of Asafoetida.

Although, she had actually called me to invite me to her Mother’s 75th birthday, she had, however, spoken with me for almost an hour discussing about my writing more so about the philosophy am spreading through my writing.

She had quoted many sentences from my stories which even I don’t remember today and had also told me many things about me and my family that I forgot long ago. In a way, she’s good enough to write my Biography today.. Hahahaha..

During that conversation, Mrs Suseela said, “Aditya garu, we are five sisters to our parents.. We don’t have brothers.. We have seen how much our beloved parents have struggled to bring us up in our life, to perform our marriages and also to make us what we are today.

They did their best for us in their life and did everything with abundant love and everlasting smile.. Now, we all five sisters have planned this surprise party for our Mom and are hosting a lunch in her honor to a few close friends at a Hotel in Banjara Hills.

I want you to attend along with your wife and daughters.. Secondly, inspired by your writing, I have written a book titled, “Amritha Varshini” in Telugu which I would be launching that day.. It’s a rare book on various Hindu Gods and Goddesses.

I wish to present the first copy of this book to you and through you another copy to Bhagawan Sriram Sir.. So, please come without fail.. My husband says, “Audi is not a trustworthy person.. He says he will come but he won’t’.. But Aditya garu, I still trust you and hope you won’t disappoint me”..

If this is all what I have to say now, then, there’s no need for me to write this spellbinding story today..

Because, it was exactly here, at this point, that the actual conversation between me and Mrs Suseela had begun and it was this part of the conversation that had prompted me to commence writing of this spellbinding true story today more importantly on this auspicious day of Srirama Navami.

Just before disconnecting the call, that evening, I asked Mrs Suseela, “Suseela garu, What about your father.. How is he now”..

In response to that casual question of mine,

During those moments of Divinity..

Had started talking about her great Father..

Went about telling his devotion towards Lord Sriram..

His Divine association with Lord Sriram..

And about the many spellbinding incidents that occurred in his life..

As a result of that association with Lord Sriram…

All through that conversation..

Without even battling my eyelids..

Except my ears, no other senses in my body were functioning..

My inner voice had stopped listening to Mrs Suseela and started rendering,

Later, for about a few hours,

I went into an exalted state of immeasurable ecstasy.. Finally, after coming out of it, had taken a decision to write this great story of this great devotee called, Sri Nethi Sambasiva Rao, for whom was “Jagame Rama Mayam”

Please Click Here to read the next part of this story