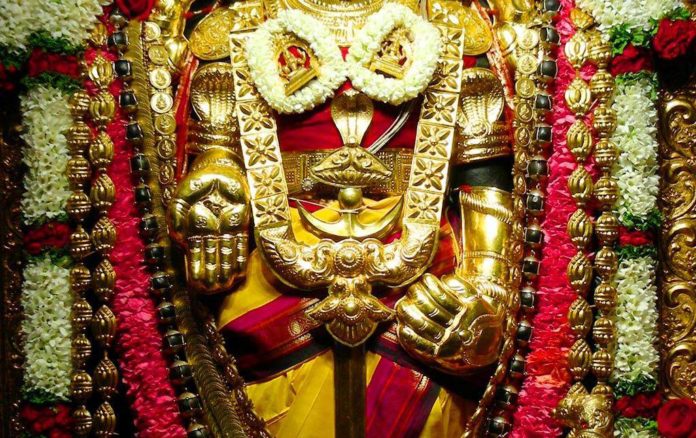 Have you ever seen any idol of a Hindu God, in this world, in only a standing position and never in sitting position just like Lord Sri Venkateswara.?..

Have you ever seen any other Hindu Deity in this world standing with such an unusual placement of His hands like Lord Sri Venkateswara..??

I know you haven’t..

Secondly, most of the devotees who come to Tirumala Temple from many parts of the world do not even know that the principal deity or the Moola Virat of Lord Venkateswara, so majestically standing in the Sanctum Sanctorum of the holy TirumalaTemple, is in fact having four arms..

While two of these four arms are clearly visible to us, the other two are at the back of the Deity in a held up and curled into fists position.. It is through these two empty back arms that Lord Sri Venkateswara is telling us that,

“Although my two back arms are now empty, am still keeping them ready to use my weapons the moment I realize that there’s a threat to humanity in general and to my devotees in particular”..

However, what we actually see on the front side of the Moola Virat are the two anterior arms that the holy Lord Sri Venkateswara has quite unusually placed..

According to the Vedic scriptures, such a peculiar hand position is called the Varada Hasta Mudra (The hand that offers boons).. With this mystic Mudra, the Holy Lord Venkateswara is very emphatically telling us that,

“I’m going to stand here on the Tirumala Hills forever to protect my devotees in this unholy Kali Yuga.. For a devotee who has complete faith in my Holy feet, am here to take care of him and his entire family during all the times they pass through the problems of this inhuman world”

What is further more unusual here is that, “Lord Sri Venkateswara’s left anterior lower hand is straight down; bent at the wrist and is found lightly resting, just below His left hip.. Such an unusual hand position, according to the Vedic scriptures ,is known as the Katya Vilambita Hastha Mudra”

“As long as my devotees have complete faith in Me I shall not allow the flood waters of this Bhava Sagara (Ocean of problems) go beyond their hip level”.