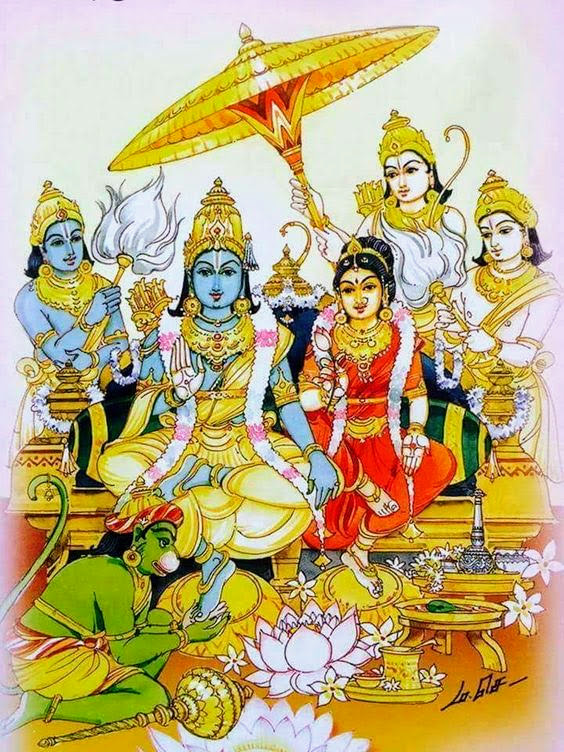 “Beauty may leave the moon, the Himalayas may become bereft of snow, the ocean may transgress its shores, but I will never violate the promise given by my father.” – Bhagawan Sriram In Ramayana

On This Auspicious day Of Sriram Navami

While wishing you all a Happy Sriram Navami, I have great pleasure in presenting before you a beautiful Sloka from the sacred book of Valmiki’s Ramayana and an interesting story behind that.

Although there are twenty four thousand Slokas in the Valmiki Ramayana and every Sloka is a Gem on it’s own, this Sloka, however, is the most beautiful Sloka in this entire Hindu epic.

It is so, because no other Sloka in the Ramayana describes the characteristic traits of Bhagawan Sriram in a better way than this Sloka.. What makes this Sloka more beautiful is, “it is recited by Maricha, a demon, in praise of Sriram”.

Meaning : Sriram is the personification of Dharma and a true warrior saint.. Although He’s the Ruler of all the worlds, He’s living in a human form on Earth.

Now, Here’s The Story Behind This Sloka

One day, demon king Ravana’s sister, Surpanaka, turns herself into a beautiful woman and goes to Sriram, who was serving his 14 year exile that time, and proposes to Him to marry her.. Sriram smiles at her and then showing Sita, tells her, “am already married and that beautiful lady Sita is my wife”.

Then in a teasing tone, He tells her – as He knows who she actually is – showing Lakshmana, “that handsome man is my brother, you go and propose to him.. He will marry you.. He would be an ideal husband to you”

Surpanaka goes to Lakashmana and proposes.. Understanding the wit being played by his brother, Lakshmana tells her, “am nobody in front of Him.. Go and request Him agan to marry you.. So, what He’s married.. You can still be His second wife.. There cannot be a more ideal husband than Him in this world”.

Surpanaka goes again to Sriram and asks Him to marry her.. Sriram turns serious this time and tells her, “I cannot marry you, I have already married her”.. A jealousy filled Surpanaka quickly pounces upon Sita and tries to attack her.

Reacting swiftly, Lakshmana pulls out his sword, reaches Surpanaka in one go and cuts her nose and ears.. A weeping Surpanaka approaches her brother, Khara, a man eating demon, to help her in avenging her humiliation.

In a fierce battle, Sriram kills Khara and his 14,000 army of demons..

A shocked Surpanaka then runs to her elder brother Ravana and tells him the whole story.. As Maya befalls upon Ravana, he hatches a plan and goes to Maricha, his ally, and seeks his support.. Here’s what he tells Maricha,

“Maricha, an ordinary human being called Sriram and his brother have humiliated my sister.. This is an insult to our kingdom of Demons.. We must avenge this insult and teach them a lesson.. Let us abduct Sriram’s wife, Sita.. Here’s my plan for that.

You must go to Sriram’s Hermitage, in the form of a Golden Deer, and impress Sita.. She would like to own you and request her husband to hunt you and grab you.. Sriram will try to chase you.

You would divert Him and run away.. Meanwhile, I will go there in the form of a Saint and seek alms from Sita and when she comes out, I would pick her up and take her away to Lanka.. Is that clear..??”.

“Dasa Kantaa, Whom you are referring to as a normal human being is not a human being at all.. He’s Maryada Purushottam, Sriram, son of King Dasaratha of Kosala Kingdom.. Do not get carried away by what is said about Him.. He’s God in human form.. Your power or even the combined power of all our demons will not be sufficient to even face Him.

I can understand the humiliation of your sister and your pain, but, sorry to tell you, Sriram is a noble personality, a personification of Dharma; on His own He will not harm anyone certainly not a woman unless offended.. Your sister must have tried to harm them, so, He must have punished her.

But, be happy, He didn’t kill her may be she’s a woman though a demon.. Let us forget this here and not make a big issue out of it.. Enmity with a great warrior like Sriram may wipe out our race.. Let us not take a small issue that far.. Leave everything.. Let us live happily the way we are leaving now”

A fully angered Ravan tells Maricha in a threatening tone, “how dare you praise an ordinary human being in front this all powerful Siva Bhaktha, Ravana Brahma.. What did you say..?? He’s God.. Looks like you have gone mad, Maricha, you are seeing God in a human being.. Wake up from your madness and do what I say”

Almost falling on Ravana’s feet, Maricha says, “hey Ravana Brahma, you are not just a great Siva Bhaktha but also also a Maha Gnani.. Do not fall into Maya and please understand what am saying and why am saying so.

Sriram is certainly Lord Vishnu in human form.. Don’t fight with Him and do not even go in front of Him.. One arrow from Him will destroy you.. Let me tell you my experience with Him.

Several years ago, I went along with my assistants to spoil an Yagna being performed by Sage Viswamitra.. I did all that I could do to spoil that Yagna, that day, because if that Yagna was successfully completed, man will attain more power over us.

Suddenly, two boys came from nowhere and started attacking us.. The elder boy was 12 – year old.. They were disciples of Viswamitra.. Looking at their age, I laughed at them and heckled the Sage saying,

“What Viswamitra Maha Muni, you didn’t get any other men, elder than these milky faced boys, to protect you..?? What can they do to stop me.. Cute boys, don’t even feel like killing them.. Just ask them to go inside and drink milk”.

Before I could even complete my sentence, that cute 12 – year old Boy quickly aimed an arrow, targeting me, and shot me displaying great power not in His hands but in His eyes.. How to describe that power the Boy displayed that moment..?? That arrow had hit me so sharply and with so much power that I went and landed on the seashore hundred leagues away from Sage Viswamitra’s Ashram.

Hey Kekasi Nandana, that 12 – year old Boy – a Neela Megha Syama – was Dasaratha putra, Sriram, Who is not just a great warrior but God in human form.. If that is the power He could exercise at that tender age of 12, imagine what would be His power today as an young man.. Only God can have such power, Raja.

So, if that was how He had punished me, that day, just for disturbing His Teacher’s Yagna, then, imagine how He would punish us tomorrow for abducting His wife.. Am not even able to imagine what will He do.. Please listen to me, O’ Raja.. You have a beautiful family, please don’t do this.. Let us forget everything here.. He’s Lord Vishnu in human form, He will certainly kill us”.

Fretting and fuming, Ravana tells Maricha, “are you not ashamed of talking like this, you moron Maricha.. Am ashamed to have an ally like you.. In a battle, one time we take the upper hand and one time our opponent takes the upper hand.. That’s common.. Ultimately who wins the battle is important.

Looks like with one blow of that Kid you went mad and forgot all the basics of Yuddha Tantra and uttering sheer nonsense today.. If He’s so powerful, Maricha, then am the most powerful ruler on earth.

Just by seeing me even the Oceans freeze, the Sun shivers to rise, the Moon hides in clouds, the five elements of Nature stop their duties and every animal, beast and human go breathless.

Now listen to me, Maricha.. As the most powerful ruler on Earth am now commanding you to do what I say and execute my plan just the way I have designed.. Using your tantric powers become a Golden Deer and lure Sita.. Rest of the work I will do.

Obey my orders and save your life.. What did you say..?? You are afraid Sriram will kill you..?? I don’t agree with you because am sure you will runaway and save your life.. Jut in case He kills you that would be on another day not today.. Because, today if you refuse my command I shall right away kill you and go away from here.. What do you say..??”

Turning Philosophical And Submitting Himself To Fate,

It is here, that a hapless Maricha, with tear filled eyes, had recited that most beautiful Sloka in the Ramayana.. Here’s what he said,

“Hey Poulastya Brahama Poutra, looks like our death is imminent in the Divine Hands of Bhagawan Sriram.. In spite of me telling you so many times you are still saying you are the most powerful King on Earth and that Sun, Moon, Oceans. Elements of Nature and every living being on planet fear you. But He’s,

Raamo vigrahavaan dharmaha, Saadhu Satya paraakramaha.. Raajaa sarvasya lokasya, Devaanaam iva vaasavaha which means He’s the personification of Dharma and a true warrior saint.. Although He’s the Ruler of all the worlds, He’s living in a human form on Earth.

If Sriram is God, hey Raja, His wife Sita is Goddess.. And by abducting her we would be committing the most heinous crime ever committed in the history of mankind.. Posterity will never forgive us for this crime.. By submitting myself to destiny now am ready to obey your orders and do whatever you say.

If Death is inevitable, hey Ravana, let me have the honor of dying in the Hands of the Divine than in the hands of a Demon.. I would consider myself blessed that way .. How many sinful Demons like me on Earth will get such an opportunity.. I shall attain Moksha – the Salvation.. Count me in”

In the later part of time, as their Destinies were so designed by the Divine, Maricha goes in the form of a Golden Deer and dies in the hands of Bhagawan Sriram and attains Salvation.. That’s not all..

With that death, he also paved way for the great battle of Ramayana that finally resulted in the killing of Ravana and Kumbhakarna – originally Jaya and Vijaya, the Dwrapalakas of Vaikunta – to kill whom Lord Vishnu had taken the human form of Bhagawan Sriram.