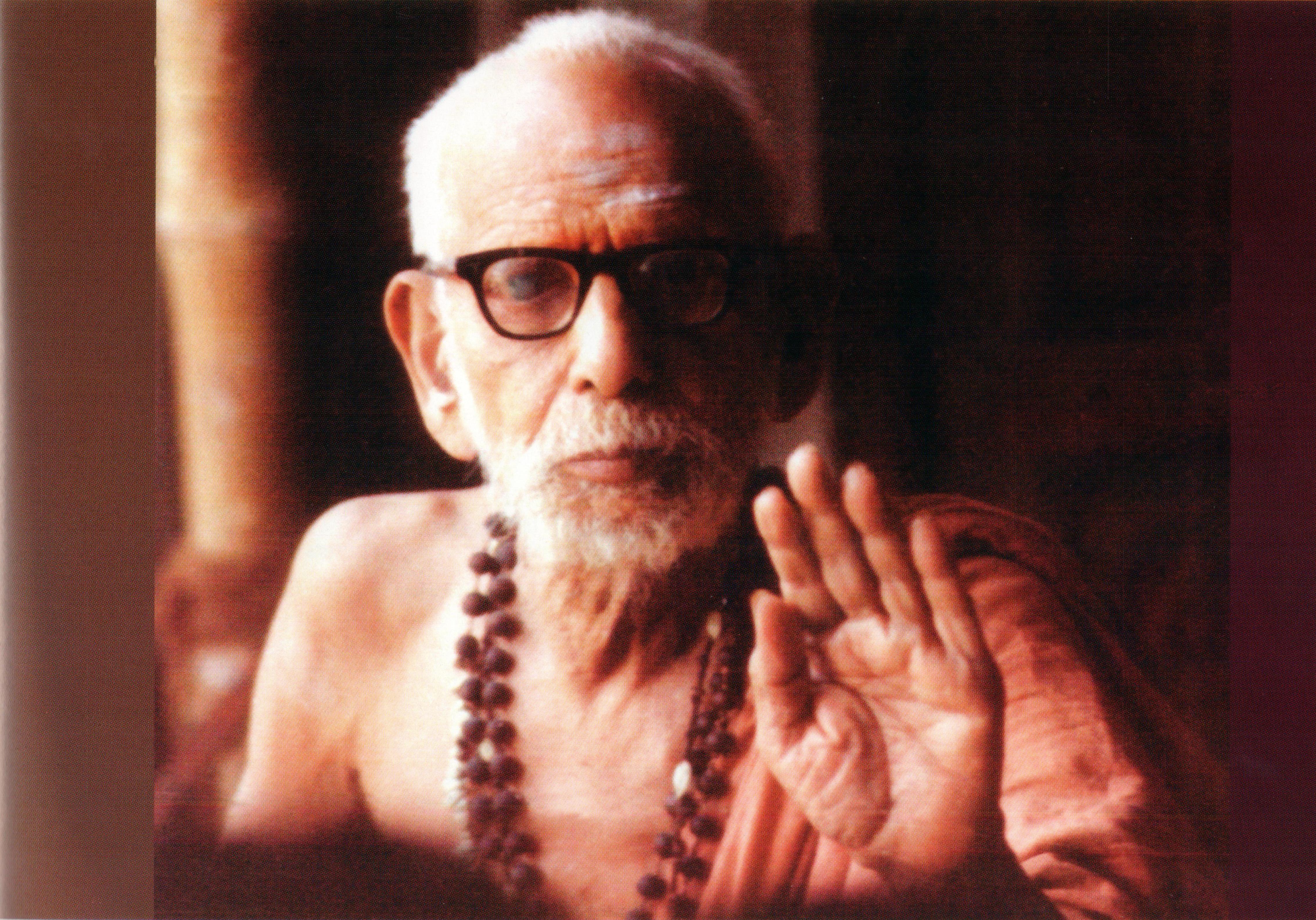 On a midnight some time during the month of March, 1991..

A telegram delivery boy hurriedly walked into former Indian prime minister Rajiv Gandhi’s secretariat in New Delhi… He delivered an urgent telegram paper to an authorized person there.. He then asked that person to immediately hand it over to Rajiv Gandhi.

That telegram was sent by the office of His Holiness the Paramacharya of Kanchi Kama Kothi Peetham, Shri.Chandrasekharendra Saraswati.. It was a highly confidential message, from His Holiness, carrying some very important instructions meant to be conveyed to Rajiv Gandhi.

Rajiv Gandhi at that time was on a whirlwind tour of Northern India campaigning for his party’s victory in the next general elections.

Surprisingly, for some strange reasons..

This crucial telegram message, according to some people, had never been brought to the notice of Rajiv Gandhi.

Although the exact reasons for such an irresponsible act are so far not known, what remains now to be known is that why such an important message from the holy Paramacharya, whom Rajiv Gandhi very reverentially follows, was not conveyed to him.

Did anyone deliberately hide it from Rajiv Gandhi or was that just a routine human error.. ??..  Or was there any other large scale criminal conspiracy that prevented that telegram from being sent to Rajiv Gandhi..

Although there are many such clueless questions that remain to be answered today, the whole drama behind that crucial telegram message however still remains a mystery..

Whatever may have happened in that secretariat, after the telegram had reached there or whoever may have hidden it that night – either intentionally or unintentionally from Rajiv Gandhi – have committed the most brutal error ever committed in the history of Indian democracy.

Because of that error, the world’s largest democracy had lost it’s most handsome prime minister, killed in a brutal bomb blast in some of the most tragic, unforeseen and mysterious circumstances.

But what was there inside that telegram and why did the Kanchi Paramacharya sent it..??

Almost all the members of the illustrious Nehru family, right from Jawahar Lal Nehru to Rajiv Gandhi, were not only ardent devotees of His Holiness The Maha Periava Or Paramacharya Of Kanchi Kama Kothi Peetham, Sri Chandrasekharendra Saraswati but were also staunch followers of the doctrines of the holy Kanchi Peetham.

It would not be an irony now to say, “there wasn’t a single major policy decision, the Nehru family had taken those days, without consulting the holy Paramacharya”.

In fact, on several occasions, Mrs.Indira Gandhi had sought the personal audience of His Holiness the Paramacharya of Kanchi, to discuss with Him the various critical issues that were disturbing her during her tenure as the prime minister of India.

His Holiness the Paramacharya too were very generous in guiding the family of prime ministers whenever there was a need for Him to do so.

The Paramacharya, in the interest of the welfare of the people of the largest Hindu nation in the world, were always there with the Nehru family as and when the family of prime ministers was passing through any personal or professional crisis.

(There are many who argue that Nehru was an atheist and was never on any spiritual path and certainly had not followed the Paramacharya.. Since I had neither seen nor belong to that era, I have no capabilities to prove these arguments right or wrong).. PERIOD

And it was during one of those crucial junctures..

The Paramacharya – with the divine power He has to foresee anyone’s future – noticed an anomaly in the life wheel of Rajiv Gandhi.. With the noble intention of saving the life of one of the most prominent visionaries of modern India, the holy Paramacharya had immediately sent that urgent telegram message to Rajiv Gandhi.

As fate would have it, Rajiv Gandhi could not see that crucial message from the holy Paramacharya in time, which would have prevented him from surrendering pathetically to a ghastly death on the 21st of May, 1991..

And this is what the holy Paramacharta had conveyed to Rajiv Gandhi in that crucial telegram message..

“Dear Rajiv, please postpone your proposed visit to Tamil Nadu in May, 1991.. I see a serious threat to your life during that period.. If you still have some compelling reasons to do so, please visit the Kanchi Math first and seek the divine blessings of His Holiness Sri Sankara Bhagawatpada and then go ahead with your tour in this state”

I know it would be very difficult for anyone to believe this story.. However, it doesn’t mean that the undeniable fact, here in this case, has to lose it’s status just because no one ever believes it.

As we all know, His Holiness the Paramacharya of Kanchi Kama Kothi Peetham, is revered by millions of His followers, around the world, as the reincarnation of Hindu God Siva.. There are also several instances that tell us that the Paramacharya was empowered to foresee our future.

Similarly, He would have visualized the death of Rajiv Gandhi too and did His best to prevent it.. However, Rajiv Gandhi’s fate thought otherwise and took him away.. PERIOD

As a humble follower of His Holiness – The Paramacharya Of Kanchi – I have written and posted this article on my other personal blog, a couple of years ago, with the sole intention of telling the world how fatal some errors can turn out to be.

While some of the comments said am trying to glorify His Holiness; some said I brought disgrace to the Kanchi Mutt; some said it was an election stunt by Congress party to garner a few sympathy votes; and some said it was a conspiracy theory that needs to be probed..

All in all, I was very deeply hurt with all such rude comments and at one point of time had even decided to delete the whole article.. But quite miraculously at that point, His Holiness the Kanchi Paramacharya Himself, in Whom I trust, came to my rescue, through this elderly lady from Kerala, called Ms. Maragatham Venkatachalam ..

Almost endorsing what I had claimed in the story, Ms.Venkatachalam had posted the following comment in the popular FB group ” The Iyer – Iyengar Network “.. This comment was in response to one Ms. Chitra Shankar who shared my article link in that group..

Here’s the elderly lady’s comment who, I believe, closely follows the activities of the Kanchi Mutt..

“The story is true but slightly different… On knowing about the visit of Rajiv Gandhi, Periava asked .. why is he coming here? At the same time an associate of the Mutt who was familiar to the VIPs visiting the Sage consulted an astrologer from trichur…. A nambudiri from Trichur on the fortunes of Rajiv Ghandhi”

“The Nambudiri did a prasnam and said that Rajiv Gandhi faced great danger from Agni (Fire)…This prediction coupled with Periava’s words.. why is he coming here….made the devotee send a fax message from the office of a textile exporter from Madras to the AICC office in New Delhi asking Rajiv Gandhi to postpone his visit to Madras”

“This message was seen by one of the important office bearers of AICC but not shown to RG as a lot of arrangements for the visit had already been made.. In fact if I remember right the copy of the fax message with the time and date stamp was published by the Times Of India within a day or two of the tragedy. The news papers’ archives would prove this. ”..

This comment throws a little more light on what I have stated in this article.. You may still find this comment on that blog..

“I would like to add my 2 cents to this conversation.. I am leaning on my memory from what I read in the Tamil weekly Ananda Vikatan sometime in the late nineties.. Shri. T.N.Seshan (TNS) had retired as CEC then and was writing a weekly series in Vikatan about important events in his life. I think we all can trust TNS.

It’s a public record that TNS was the Cabinet Secretary from March 1989 to December 1989 when RG was PM before becoming Chief Election Commissioner from Dec 1990 to Dec 1996… We also know that TNS was an ardent devotee of Kanchi Periyavar.

In one of his weekly writings, TNS wrote that Kanchi Mutt had informed RG thru’ fax message about the impending danger for his life in TN, during his planned May 1991 visit. The message also advised RG to postpone/cancel his TN visit then..

According to TNS, the warning did reach RG, who brushed it aside saying that a people’s leader like him should not be cancelling programs based on religious prophecies… Rest is history”

Whether it was Rajiv Gandhi or his secretariat, whoever had ignored this telegram message or fax message, from His Holiness the Paramacharya of Kanchi, had committed the gravest error of their life.

If only Rajiv Gandhi had honored this crucial telegram message, from the Paramacharya, and had postponed his visit to Tamil Nadu in May, 1991 he would have certainly survived the assassination bid on his life.. But it’s too late to talk about all such things here.

There’s nothing more that I can say, except..

God On Call, written by me in English on Lord Sri Venkateswara and Tirumala Temple is a powerful book that presents twelve spellbinding true stories based on real life miraculous incidents that occurred in the lives of some extraordinary personalities like Swamy Sri Rangnathananda of Ramakrishna Mission, Music Queen Smt.M.S.Subbulakshmi and Carnatic Music Maestro, Sri.Rallapalli Ananta Krishna Sarma.

This book also presents a powerful new Puja to Lord Sri Venkateswara called the Sri Venkateswara Maha Mantra Puja that is bringing miraculous changes in the lives of scores of people around the world.

Please Click Here to buy God On Call on our eCommerce website for delivery anywhere in iNdia or the world.. ..

Please Click Here to buy it on Amazon and also to read a few amazing reviews it is receiving from readers.