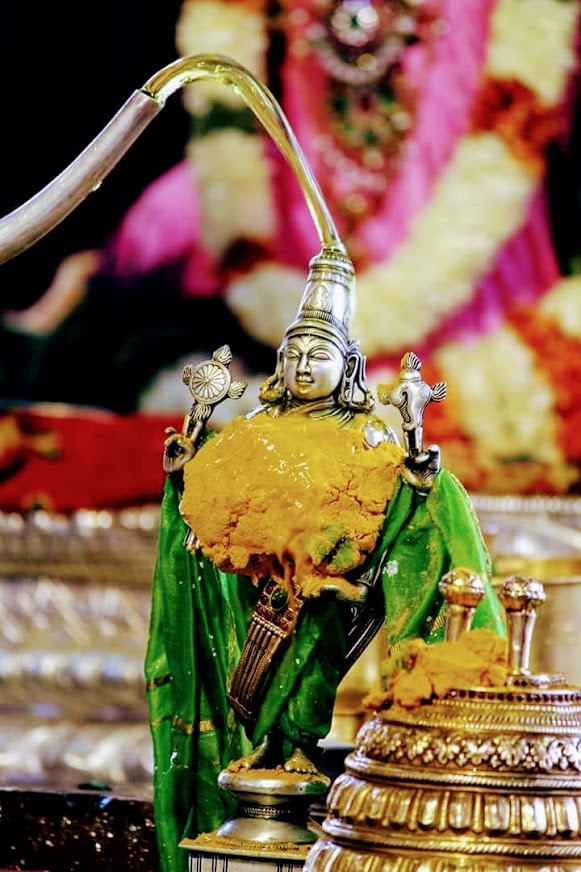 Lord Sri Venkateswara (meaning – the God who burns all our sins),

Who according to many arguments and beliefs of great ancient Hindu philosophers and preachers like Saint Ramanujan, is an incarnation of Lord Sri Maha Vishnu.

Lord Sri Maha Vishnu, according to the holy Vedas, “is one of the five primary forms of Hindu God who along with Lord Brahma and Lord Siva form the divine order of Trinity that constitutes this universe”.

In this said divine order, while Lord Brahma is the Srishti Karaka – the Creator; Lord Vishnu is the Sthithi Karaka – the Maintainer or Preserver; and Lord Siva is the Laya Karaka – the Destroyer or the Transformer.

The above Sloka is emphatically telling us, “The One Who is born as Sri Lakshmi Narasimha in Kritha yuga; as Raghunandana Sri Ram in Tretha yuga; and as Vasudeva Sri Krishna in Dwapara Yuga; is again born as Sri Venkateswara in the Kali yuga”, which in other words means,

“Lord Sri Venkateswara is not only the ruling God of this Kali Yuga but is also the sole savior of our humanity and this universe. Only He can solve all our human problems and only He can guide us through the ocean of the worldly sins”.

That was what Lord Sri Venkateswara, through the above Sloka, had once told Celestial Sage, Narada, which means “Narada, I shall not permanently reside in the Vaikunta nor shall I reside forever in the hearts of the holy sages. However, I shall always remain seated in the heart of every devotee who is constantly chanting my name”. PEACE

Although there are many Temples on Earth, associated with Lord Sri Venkateswara, the Tirumala Temple, however, is the first and the foremost Temple built in His name. It may be interesting to quote here, an indirect reference to the Tirumala Temple, from Verse X.155.1 of Rig Veda, that solemnly states,

“The person, devoid of wealth and vision, is implored to go to the hill which burns up all evil and drives away all obstacles to peace and prosperity. The call of the Rishi Sirimbitha has obviously not gone in vain”.

Now, where is this Tirumala Temple..??

Located on a hilltop, 853 meters above the main sea level, in the Southern part of India, Tirumala (Tiru means holy and Mala means hill) is a major pilgrimage center near the Tirupati town in the Chittoor district of Andhra Pradesh, India.

Lord Venkateswara is the principal deity (Sanskrit – Moola Virat) of Tirumala Temple. The stone idol of the Lord, that is currently here in this Temple, is about ten feet in height, which, according to many amazing legends associated with the Temple, “was quite surprisingly found by Chola King, Suveera, several centuries ago, in a large Ant – hill that was there under a Tamarind tree on the Tirumala hills”.

Later, King Thondaiman, a descendant of King Suveera had built a large Temple at a vital place on the Seshachala hills and this amazing Temple is now more popularly known to the human world as the ‘Tirumala Temple’.

According to the history of this Temple,

Lord Srinivasa, who later obtained a stone form and had become Lord Venkateswara, had personally taken King Thondaiman, before the construction of this Temple, to a particular place on the Seshachala hills and asked him to construct the Tirumala Temple there at that point, saying,

Which means, “O Raja, in the Temple am asking you to build for me, I wish to have seven entrances, three baileys and two domes with the main entrance facing the Eastward direction. I also want all the facilities in the Temple like the Asthana Mandapam, Yaaga Mandapam, Snapana Mandapam, Vastrala Gadhi (Room for silk robes), Bali Peetam (Altar Of Sacrifice) and a tall Dhwaja Sthambham (Flag Staff) as well”.

Saying so, Lord Srinivasa had then taken the King o a nearby place and showing him a tree there, said, “Look at this Tamarind tree Raja. This tree had offered me great service and hence is so beloved to me. Preserve it carefully forever and leave ample space for this tree in my Temple”.

Later, Lord Srinivasa had personally designed a plan and offered it to the King instructing him to build the Temple according to that plan. Later, King Thondaiman had built the Tirumala Temple exactly the same way he was instructed by the Lord to build it.

In fact, Thondaiman, much to the pleasure of Lord Srinivasa, had recreated the entire Vaikunta (Lord Vishnu’s celestial abode) on the Seshachala hills. Consecrated with Vedic hymns by the Sages and Gods, the Tirumala Temple tower was then named the ‘Ananda Nilayam’ – the Abode of Happiness.

Lord Brahma took a promise from Lord Srinivasa that He (Lord Srinivasa) would remain on the Seshachala Hills till the end of the 28th Kaliyuga and shall redeem all the sins of His devotees who would come there to view Him in the Tirumala Temple.. Lord Srinivasa smiled and agreed.

Later, amidst chanting of Vedic hymns by all the Gods, Sages and priests, Lord Brahma had lighted two oil lamps inside the Garbha Griha (Sanctum Sanctorum) of the Tirumala temple, saying,

“These oil lamps shall burn eternally until the end of this Kaliyuga and in the end go off on their own, signaling the end of the yuga. After that signal, Lord Srinivasa shall return to Vaikuntam and this holy Ananda Nilayam would collapse”.

Saying so, Lord Brahma then turned to Lord Srinivasa and said, “My Lord, is there anything else that You want me to do for the well being of Your devotees”.. Lord Srinivasa smiled again and said,

“My son, now arrange for a separate festival for Me wherein right from the Dhwajarohanam to Rathotsavam, Am taken out in a procession on one celestial vehicle each day.. This festival shall not only enable My devotees to have a closer look at Me but would also help them offer their services to Me. You must personally stay and conduct this festival year after year as long as am residing on these Seshachala hills”.

Lord Brahma obliged and had immediately called for King Thondaiman and told him,”O Raja, make quick arrangements for the construction of rich and colorful chariots that are decorated with Golden umbrellas. Our celestial architect, Viswakarma shall assist you during the making of these Chariots. You may also take his full support in completing this entire task”.

Then, Lord Brahma had called for Viswakarma and introduced him to King Thondaiman and ordered him to offer whatever support Thondaiman would be needing from him in future with regard to the construction of Tirumala Temple.

Later, personally supervising every aspect of the event, Lord Brahma, as per the instructions given to him by Lord Srinivasa, had invited all the Gods and Goddesses to that grandest sacred festival ever held on the Earth.

Finally, on an auspicious day (Vidiya)

When the Sun God entered Kanya Raasi, and when Lord Brahma and all the other Hindu Gods and holy sages were chanting the sacred Vedic hymns, the first glorious festival of Sri Vari Brahmotsavams have begun on a never before seen grand scale, on the holy Tirumala hills, with the inaugural event of Dhwajarohanam marking the beginning of this great event.

Initially, these Utsavams were called Srinivasotsavams, however, with the passing of time they have become more popular as Tirumala Brahmotsavams. Ever since, it had become a belief among the devotees that,

It is further believed and in fact experienced by many that “even a few seconds of standing inside the ‘Ananda Nilayam’ and viewing the holy idol of Lord Venkateswara would bless the seeker with Ananda (happiness) for life”.

After the Tirumala Temple was built and the first Brahmotsavams were held, people in and around the Tirupati town and Chittoor district of Andhra Pradesh have come to know about the Temple’s existence and have slowly started visiting it with their respective families.

In course of time,

The word about this newly built Temple and also the amazing true story associated with it had spread all over Karnataka and Tamil Nadu – the two neighboring states of Andhra Pradesh.

As a result, people have started coming to this Temple from many places of these two richly cultured states. However, to reach the top of the seven hills in those days was really an uphill task for these devotees as they had to pass through many rough terrains of the dense Tirumala forests.

Nonetheless, people would still visit the Temple braving through the dark forests of Tirumala hills with a great belief that, “our Lord Venkateswara is there to take good care of us”.

For them, viewing their beloved Lord was more important than viewing their own well being. That was; that still is; and that would forever be the belief of millions of devotees who will be visiting the powerful Tirumala Temple, even today. PEACE

Gradually, with the passing of time,

Many facilities like ghat roads and other amenities have been introduced by those day’s rulers of the region and later by the state’s ruling governments to facilitate a completely safe and smooth journey, for the devotees, through the wild jungles of the seven Tirumala hills.

These measures have considerably increased the frequency and volume of the visitors to the Temple and as a result the Temple too had started gaining more popularity all over the world. Quite surprisingly, at this same time, many devotees have started reporting to the world many miraculous experiences they have had with Lord Venkateswara while they were on the Tirumala hills.

Such news about the occurrences of miracles have started spreading rapidly all over India, through word of mouth, thus raising furthermore curiosity among many more devotees who haven’t thus far visited the Tirumala Temple.

Slowly, they too have started visiting the Temple, followed by many more in their next generation. Gradually, a strong word had started spreading all over India, that,

“Lord Venkateswara, also known as Lord Balaji and Lord Srinivasa, is a powerful Hindu God who would respond every time His devotees call Him to rescue them whenever they are in a crisis and wherever there is a problem in their life”.

Thus, Lord Venkateswara is the Lord of Lords, the One and only God.. And as the One, He answers those who turn to Him and pray to Him.. He is our Father in Heaven of the Christian faith, the Allah of the Islamic faith, and the One that goes by various names in the Hindu pantheon and the numberless other paths in the Universe that lead to Him.

He is the Narayana, the all pervading One; and a KatyaVilambhitha Murthi, Who protects and releases all from bondage.. “Sarva Dharman Prativajya Mamekam Saranam Vraja” is the message of this Absolute One, Who says,

“Seek Me the One for thy protection and I shall deliver thee from sin and bondage”.