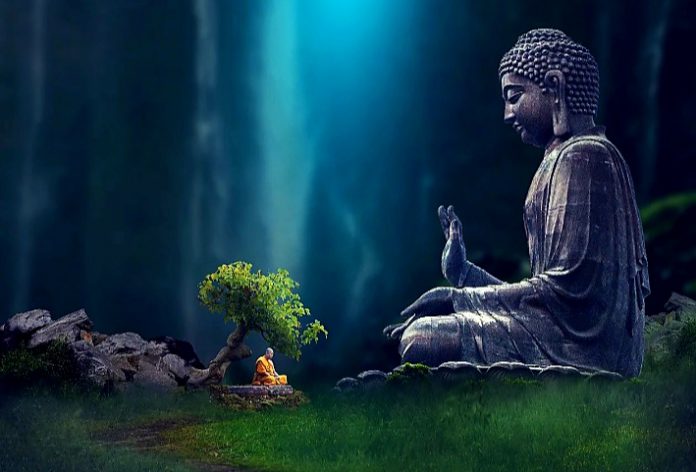 Long ago in the city of Kapilavastu,

Where Gautama Buddha was born as Siddartha and where He had spent 29 years as Buddha – the Enlightened – there was an old lady living a life full of loneliness making a petty living cleaning the streets of the city.

Everyday she would observe many aristocratic and royal family members offering gifts to Buddha in a large number. On a fine morning, she too thought that she should offer something to the Daivam Maanusha Rupena, Buddha, in Whom she would see a great light whenever she would look at Him.

However, owing to her poor living conditions, she couldn’t understand what is that a poor old lady like her can really offer to such a glorious Divine personality Who is receiving riches in abundance from the rulers of the country.

Weeping silently, sitting in a lonely corner of the street, she would silently offer her prayers to Buddha, everyday, to give her an opportunity to gift Him something that is worthy of her living.

She finds a new shop opened in that street selling earthen lamps and oil. Seeing that shop, she decided to buy a small lamp and also a little oil and light it in front of Buddha. After deciding so, she first checked the money she had with her.

Found six copper coins treasured in her sari which would be sufficient enough for her meals that day but not to buy the lamp. Without a second thought, she decided to skip her meals for the day to light a lamp in front of Buddha.

Then, she slowly approached the shop and asked the shopkeeper, ”how much does one small lamp and oil sufficient for it cost..??”. The shopkeeper said, “twelve Copper coins”. Almost begging him, she said,

“I only have six coins with me now which are left for my meals today. Instead of having my meals, I have decided to buy a lamp and light it in front of that Deva. Please help me, I shall repay you at one coin per day in the coming six days”.

The shopkeeper replied saying, “I understand your devotion Mother, but this is a newly opened shop and cannot afford the facility you are seeking. Am answerable to my Father. Since you are saying you need this lamp to light in front of the Deva, I can remove my profit and offer it to you at the cost price of ten coins. Please understand”.

Cautiously collecting them from him, she slowly walked towards the place where Buddha was seated and firstly offered Him her Namaskar. Then, walking to a small rock platform that is there a few feet away in front of Buddha, she sat on the floor and very reverently more so devotionally had lighted that lamp.

After lighting the lamp, she lifted it with both her hands and turned it towards Buddha, offered Him a small prayer saying, “To This Great Wonder, I praise” and carefully placed it back on the floor and quietly walked away.

Later, in the evening,

Gautama Buddha and all His followers vacated that place and left for the day. When they returned the next morning, one of the followers of Buddha was surprised to see that the particular oil lamp lit by the old lady was still glowing emitting great radiance all around.

Wondering “how such a small lamp with only a little oil in it can remain lit for so long”, he tried to put it off because of his personal belief that the previous day’s lamps should not be offered to his God Buddha the next day.

Firstly, he tried to blow it off by going close to it and generating a whiff of wind from his mouth. The lamp didn’t go off. With great surprise, he then tried to put it off with a wave of his hand. He couldn’t put it off. Then, he tried all the possible human methods to put that lamp off but he couldn’t.

Buddha was silently observing him with a gentle smile.

Helplessly turning to Buddha, he pleaded for mercy.

Going into a deep shock, that follower asked Buddha, “but why Deva”. Buddha smiled and said,

“That lamp was lit by a poor old lady cleaning the streets and making a living for the day. Yesterday, she skipped her meals and fasted the whole day just to buy that lamp and lit it in front of me. When a devotee of such unmatchable devotion, with such purity of mind and with so much of love in her heart lights a lamp of great character, tell me, which God will not be pleased with her devotion and surrender to her..?? If ever that lamp extinguishes, devotion is dead on earth”.

Stunned with what Buddha said, all the followers who heard those Golden words from Him, asked, “Deva, may we see that great lady..??”. Asking them to follow Him, Buddha got up from His seat and walked straight to a corner of the street – where that poor old lady was sweeping the road – and stood before her.

Shocked by Buddha’s sudden appearance before her, the old lady quickly folded her hands and then falling on His feet said, “Deva, did I make any mistake by lighting that lamp before You yesterday, did You come to punish me..??”. Lifting her up with both His hands and smiling at her, Buddha said,

“Beloved Mother, you are an embodiment of devotion and a personification of purity. Am blessed to have a devotee as devotional as you. The lamp you lit yesterday will burn to eternity. It will be viewed even by all the Gods in the heavens. My friends have come to have your darsan. Please bless them, Mother”.

On hearing that from Buddha,

All His followers fell on her feet. The poor lady couldn’t believe what was happening in front of her eyes. She looked at Buddha. She noticed a great light in His eyes as though telling her, “Asatoma Sadgamaya, Tamasoma Jyotirgamaya, Mrityorma Amritangamaya”.

She quickly folded her hands and closed her eyes. Understanding her condition, Buddha came close to her and holding her both shoulders with His hands,said, “Mother, with your unmatched purity and with your unparalleled devotion you have conquered Divinity. Am granting you salvation”.

He placed His right hand on her head.

To the utter dismay of everyone there,

With that Divine touch of Buddha,

Turned into a lamp,

Traveled towards the heavens.